Eduardo Galeano - Children of the Days: A Calendar of Human History 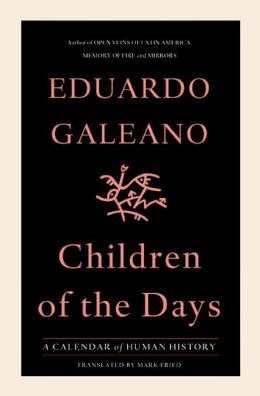 Eduardo Galeano is probably best known for his wonderful history The Open Veins of Latin America which was famously presented to President Obama by Hugo Chavez. In that book, Galeano told the forgotten story of South America, the rape and murder of its indigenous peoples, the stripping of its natural resources by colonial power and the ongoing subjugation of the continent.

Children of the Days marks many of those events, but it also celebrates the resistance and the inspiration of people. In the form of a daily dose of history, Galeano covers many arenas, from resistance to oppression, to the solidarity of the picket line, to the inspiration of songs, poems and literature. Football makes a frequent appearance, but usually to tell a story of oppression or resistance. There is the tale of the footballers who painted their faces black in solidarity with a black player who was the victim of persistent racism from Italian fans, or the "most pathetic" match ever played when FIFA colluded with the dictatorship of Pinochet to make sure football went ahead literary over the blood of tortured victims.

But Galeano's book isn't just a collection of such stories. It is a work of literature in its own right. Sometimes different days follow each other, to illuminate bigger stories, but every day is itself a work of art.

On this day in 1756, Wolfgang Amadeus Mozart was born . Centuries later even babies love the music he left us. It has been proven time and again that newborns cry less and sleep better when they listen to Mozart. His welcome to the world is the best way of telling them, 'This is your new home. And this is how it sounds."

6 June - The Mountains That Were

Over the past two centuries, four hundred and seventy mountains have been decapitated in the Appalachians, the North American range named in memory of the region's native people. Because they lived on fertile lands the Indians were evicted. Because they contained coal the mountains were hollowed out.