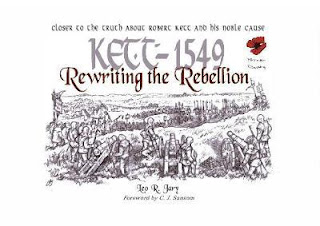 One of the best known agrarian rebellions in England is Kett's Rebellion of 1549. Centred around Norwich, it was part of a year of rebellion that shook the ruling class, and culminated in the fall of the duke of Somerset, Lord Protector for the young Edward VI. All too often the rebellion named after its principle leader, Robert Kett, is isolated from the wider rebellions that took place in that year. In 1549 there were two major risings, Kett's in Norfolk, and the so called Prayerbook Rebellion in the West Country. But there were also numerous rebel camps throughout the country, and many of these were put down with force.

Leo R. Jary's new study of Kett's Rebellion is not a re-telling of the event, rather it is a study that seeks to read between the lines of contemporary chronicles and argue that the rebellion was a much bigger, and more serious confrontation than has previously been argued. Rightly Jary argues that "History is written by the victor" and that contemporary accounts of Kett's Rebellion "all refute and belittle the good intentions of Kett, the honourable purpose of the rebel cause, and the solidarity of the rebel army".

As Andy Wood has clearly shown in his book The 1549 Rebellions and the Making of Modern England Kett's Rebellion was seized upon by the establishment in the aftermath and used as an illustration of the perils of ordinary people trying to make change. In doing so the ruling class highlighted events in Norfolk at the expense of a wider tale of national revolt.

Jary seeks to correct the historic accounts and transform our view of the rebellion. A central part of this argument is that the final confrontation between Kett's forces and the royalist army under Warwick was a much larger pitched battle than the overwhelming defeat usually suggested.

I've little reason to doubt much of Jary's arguments here. In places he is a little guilty of conjecture. For instance he writes "I believe that Kett's chief gunner Miles understood that [it was dangerous to place his cannon on the rebel flanks] and placed most of his guns well to the rear of his rebels lines." But these are points made by a writer with knowledge and experience of working for the Ministry of Defence so any conjecture is made with serious considerations.

In my mind the most important contribution of the book is to make a strong argument for the real location of "Dussindale" the scene of the final confrontation between the rebels and royalist forces. This, argues Jary, was much closer to the walls of Norwich than is suggested by contemporary accounts, and Jary uses his detailed local knowledge to make a very specific case. It has always slightly bothered me that Kett would have marched away from the strategic position he occupied, and Jary shows why this is unlikely.

It is for this reason that I suspect this short book will be widely read - and because of the author's detailed local knowledge (and the maps and walking guides in the book) the book should particularly sell well to visitors to Norwich.

I was less convinced though by the author's focus on Norwich. 1549 can only be understood as a year of rebellion during times of economic and political turmoil. This explains Somerset's defeat and the late arrival of royalist troops in Norwich. I'm also sceptical of the idea of communications between centres of rebellion in an organised way. More importantly by focusing on Norwich, Jary neglects that Kett had a strategy of expanding across Norfolk to strengthen his position - militarily and politically. The attempts to capture Yarmouth and the other subsidiary rebel camps in the region aren't mentioned, yet they show how Kett's rebels had a much wider strategy and were acting from a position of strength. There is also an over-emphasis on the military aspects of the revolt and readers  would benefit for more on motivations of the rebels.

Despite these reservations I really enjoyed this little book. The publisher and author must be congratulated for producing a beautifully designed book with lovely maps and line drawings. It makes a fine addition to the literature on the Rebellion and deserves to be read by anyone with an interest in the subject.

The problem is he is not the expert he claims.

On your point about artillery. No way would artillery have been fired over head in a battle, it was not common practise and certainly not when it would have been over the heads of nervous peasants.

It would also have negated its effectivness.

In not placing the artillery in the front line alone Jary completely misunderstands the possible layout of battle, just as he demonstrates ignorance of pike and Shotte tactics.

A thin pamphlet offering nothing new.