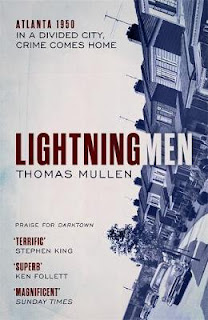 I didn't realise until I was quite some way into Lightning Men that this is actually a sequel to an earlier novel. Had I understood that I might not have picked it up, and I would have missed out on a really excellent book. Luckily it is a standalone book, but I warn you reading this first will spoil the earlier book.

Lightning Men is set in Atlanta in 1950. America is on the cusp of enormous upheaval. The Civil Rights movement is beginning to bubble under the surface and the post-war boom is starting to wane. Change has already begun. Lucius Boggs and Tommy Smith are two police officers in downtown Atlanta. Their beats are restricted and the assistance they get from the rest of the force is somewhat limited - because, alongside a handful of others, they are the city's first black police officers. Patrolling the black areas of Atlanta they see their share of crime, abuse and violence. They also have to be wary of how they are treated by their supposed colleagues, all of whom are racist, to a greater or lesser extent, and not a few of whom ride with the Ku Klux Klan.

The novel obviously takes up questions of racism and segregation. But it also deals with class. A central plot-line is Bogg's upcoming marriage. Bogg's father is a well known and well off preacher, and his parents don't approve of Bogg's fiance, a single-mother from a much lower class. But class is also present in the changes affecting the city itself, as middle class black families begin to spread out into white areas, fed up of the destitution and lack of decent housing in the slums.

Different forces try and deal with these changes - the KKK and other Nazi groups manoeuvre to protect the white areas, but even racists want to make money and the changes in the neighbourhood offer riches to some. Combine this with various criminal gangs who want to sell drugs to the poor, and not a few corrupt police, and you've got a dangerous mix.

Over the course of the novel Boggs and his colleagues have to deal with a series of seemingly unconnected events, and Boggs learns that he actually knows very little about his fiance's background. Thomas Mullen brilliantly describes Boggs' holier-than-thou arrogance, rooted in his wealthier background when compared to his wife. One of the highlights of the development of Boggs' character is that bit when you realise that the policeman is actually quite prejudiced himself. That said his prejudice is nothing compared to the majority of his force, so to make the story work Mullen introduces a couple of less prejudiced officers. I suspect reality was a lot different.

The brings it all neatly together, perhaps a little too neatly as pretty much all the good guys win, and the policemen return to the beat confident that the world is a little less horrible. But the real greatness of the book is the way that Mullen portrays Atlanta - the fear of the KKK, the violence and racism of the white police, and the deep-seated racial prejudice of white people in the face of black families moving to their area. I really enjoyed this and plan to return to Thomas Mullen's work in the future.
Posted by Resolute Reader at 10:20 pm