Shaun Jeffery - The Village in Revolt: The Story of the Longest Strike in History 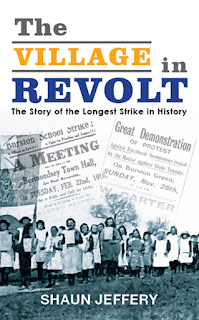 The story of the Burston School Strike, the "longest in history", is a seminal one for the British trade union movement. The story has often been told as one simply about two brave trade union activists, Annie and Tom Higdon who defied the local Norfolk establishment and fought for their jobs, and most importantly, their children's education.

But as Shaun Jeffery makes very clear, this struggle was in the context of much wider social and economic changes taking place. This is not to downplay the role of the Higdons however - they were principled individuals who were at the forefront of fighting against poverty, inequality and exploitation. But this brought them into conflict with their employers and the local representatives of the higher-classes.

The story of the Burston School strike begins then, not in Burston, but in Wood Dalling, Norfolk where the Higdons were previously employed. Here they came a cropper of the local employers after a series of disagreements of, what seem, relatively petty issues. Eventually dismissed and then re-employed in Burston it was immediately clear that the Higdon's would not simply agree to whatever the establishment wanted. They complained about the state of the school, light fires when not supposed to do so, and generally upset the local gentry and clergy by their non-subservience.

They were clearly adored by the children they taught. Fond memories from their students show that the Higdon's were good teachers, kind and generous. Helping the children whose clothing were inadequate, bringing gifts of sweets and toys, organising Christmas events and, most importantly, taking an interest in their general education when the dominant form of teaching was simply the rote learning of the "three Rs". I was struck that their generosity extended way beyond the village boundaries. Twice a year, for instance, Annie Higdon arranged for children from poor communities in London to visit for a holiday.

Jeffery begins with the background to Annie and Tom. Both came from poor rural communities, though Annie's family had money due to a lucky break by an ancestor. How they met we do not know, but it was clear that their politics meshed and they both had the self confidence needed to stand-up to their supposed "betters". Tom became a central figure in both villages in the growing trade union movement for agricultural workers, something that he was part of for his whole life. Annie was also a trade unionist in the teaching union, albeit it much more isolated, but her politics was nonetheless centered on trying improve to make the lives of the poorest.

When, on April 1st 1914, the two were sacked, almost every single child walked out on strike. While it's not clear if the Higdons knew of these plans, the students were clearly supported by their parents. Rapidly the strike became a cause for the wider movement, and as days spread into months, the authorities were unable to get the children to return. Eventually the union movement and the local population would come up with the cash to setup a "strike school" that taught Burston (and children from further afield) through the war and into the 1930s. Jeffery tells the fascinating story of how the strike became a cause célèbre for the wider union movement, particularly the railway workers union, who brought speakers and solidarity to the tiny village repeatedly.

The role of the railway union hints at the wider context to the strike. For it is clear from Jeffery's research that Burston was not an isolated event. In the months running up to the 1914 events there had been a rash of strikes by school students in England, and these were widely reported. Jeffery argues that these were in the context of widening class conflict and I think this is right. The run up to the First World War saw a growth in strikes, known as the Great Unrest, and children were not immune to the explosion in trade union membership and militancy. In the countryside this was tied up with the rebirth of agricultural trade unionism as the reality of rural poverty (something very clear to the Higdons) became unbearable.

A third factor was the breaking down of the old order in rural villages. In both Burston and Wood Dalling, it was clear that the local establishment was struggling to maintain its old role as total local authority. This was being challenged politically (by the emerging workers organisations and parties) and economically by the growth and development of new forms of agriculture (and other industries such as the railways). The spectacular rudeness and belligerence of the local school board (usually the local clergy and big farmers) in the face of what seem relatively benign demands from the Higdons demonstrates their firm belief in their right to govern. This could no longer hold and the rebellion (as well as other strikes etc) demonstrates this, as do the references by both the Higdons and the contemporary unions to "Junkers" in Norfolk. This refers to the landowning class in Germany and had a particular resonance in the context of the First World War.

Today the Burston strike is celebrated with an annual festival much like Tolpuddle. Shaun Jeffery has been part of making sure that takes place and helps us to remember this important struggle. His book celebrates the role of Tom and Annie, as well as the brave school students who went on strike, and their families who stood by and encouraged them in the face of the courts and the farmers. Their sacrifices should not be forgotten as they illuminate rural life in the early 20th century, and I am pleased to recommend Shaun Jeffery's excellent history which will both educate and inspire the reader.

Buy The Village in Revolt from Bookmarks, the socialist Bookshop - click here.