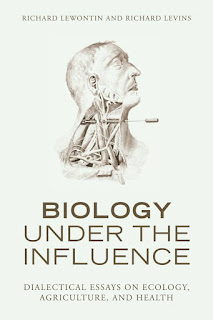 I am often wary of books that are collections of essays written elsewhere and collected together simply because they are all by one or more authors. Without a theme that holds things together they can become little more than a mix of random ideas. So I was pleased that this collection of essays by two of the world's foremost biologists works very well, despite the variety of subjects and original publications. This is because the essays approach a single question - what is the best way for scientists to try and understand the world they live in, and solve the scientific challenges they face. The subtitle of the book, "Dialectical Essays on Ecology, Agriculture and Health" show the authors' approach to this.

Lewontin and Levins argue that a dialectical approach to science is important because it allows us to understand subjects in their widest context; to appreciate the links between things and how some factors affect others and vice-versa. There is an excellent early example of this, when they look at what might cause a cholera outbreak. For some scientists an outbreak would simply be seen as "the coming of a cholera bacteria to lots of people". In a sense this is absolutely correct. But why does it come to lots of people? Why do some get sick and others not? Lewontin and Levins approach it like this:


But cholera lives among the plankton along the coasts when it isn't in people. The plankton blooms when the seas get warm and when runoff from sewage and agricultural fertilizers feed the algae. The products of world trade are carried in freighters that use seawater as ballast that is discharged... The small crustaceans eat the algae, the fish eat the crustaceans and the cholera bacterium meets the eaters of fish. Finally, if the public health system of a nation has already been gutted by structural adjustment of the economy, then full explanation of the epidemic is, jointly, Vicrio cholerae and the World Bank.

Much of the book then is given to understanding how to use this approach. The example above is a good one because it shows how a wider understanding of dialectical systems can allow the scientist to better understand the dynamics of the world they live in. This is particularly applicable, as the essays demonstrate, to medicine, ecology and agriculture and the essays here illustrate the method well.

The dialectics outlined here is not an abstract set of ideas. I was struck, for instance, while reading this, about recent left debates about ecology which have misused dialectics to try and discredit Marxist approaches that use metabolic rift theory. These have argued that such approaches reinforce a dualism between nature and society, because they talk about both these things simultaneously, even though they are inseparable. In a slightly different context Lewontin and Levins write:


No individual human being can fly by flapping his or her arms and legs... Yet human beings do fly as a consequence of social interaction and culture that have created airplanes, pilots, fuel, airports and so on. It is not society that flies, however, but individuals in society. "Parts" have acquired properties contextually.

There is much in this book, but the reader must be warned. Some parts of it are quite difficult, and while every chapter contains real gems of insights, I found some of the subject matter difficult. So the sections that examine Systems Theory or different examples of feedback in systems are hard to follow, even though the authors' do very well in trying to make them accessible.

It is worth concluding by reminding ourselves that the central task of the book is to argue that it would be wrong to approach subjects by stripping them of their context; or understanding issues as part of wider, dynamic, constantly changing systems. You can't understand public health without looking at the state of public health services, the costs of treatment, atmospheric pollution and so on. Its not simply about germs, but the context in which those germs exist. Similarly, hunger is more than simply a lack of food; its also about a entire food system geared to making profit, not feeding people.

The final chapters look at this approach and the way the authors suggest it has tried to inform the practical reality of science, agriculture and medicine in Cuba. Here they argue the nature of the government and its isolation as a result of blockade and embargo has required a different approach. I don't agree with the authors that Cuba is an actual example of socialism in practice. But it is certainly true that their approach to medicine and agriculture has real benefits to the population of the island. I actually found some of this material very interesting and particularly illuminating.

The title of the final chapter, "Living the 11th Thesis" is a demonstration of how the authors' approach to science cannot be separated from their activism. Marx's thesis, that the philosophers have only interpreted the world, the point is to change it, runs through this book like a red thread. This is not a book about science. This is a book about how to make science a tool of human liberation, and I recommend it to readers, despite the inherent difficulties, as a wonderful example of that practice.