R.F. Delderfield - To Serve Them All My Days 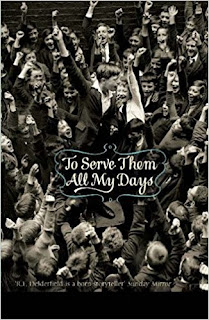 Miner's son David Powlett-Jones is shell-shocked after three years on the Western Front. Rather strangely his doctor suggests he'll recover by getting a job in a remote public school in the west country and, despite his utter lack of teaching experience, the young man is immediately offered a teaching post by a rather desperate headmaster. This is how To Serve Them All My Days Begins and if it seems unlikely that's the least surprising of some of the coincidences and bits of good luck that Powlett-Jones experiences through the next 600 odd pages.

Delderfield loved the sweeping historical yarn, and the rather unlikely start to this novel is really an opportunity to setup a interesting individual in an unusual situation to allow all sorts of events to take place which allow the author to comment on the arc of English history that begins in 1918 and ends half way through the Second World War. Powlett-Jones arrives in a minor public school, Bamfylde, which itself has seen better days. He immediately distinguishes himself by refusing to teach history traditionally, instead engaging the boys (they are all boys) in discussion about the war and its causes.

Simply by discussing these subjects, and arguing that not all Germans are beasts, and questioning the priorities, Powlett-Jones is immediately labelled a Bolshie. In fact, a running theme through the book, is the way he is seen as an outsider, a radical. Yet the irony is, Powlett-Jones isn't really Bolshie at all. In fact he is simply looking for a better world, and he finds it for himself in the dusty corridors of Bamfylde. Delderfield cleverly weaves the ups and downs of the 1920s and 1930s into Powlett-Jones' own life. But PJ as he is known by most of his colleagues and friends, actually manages to avoid any real engagement with the sweeping changes taking place. In fact, he prides himself that his own personal ups and downs seem to mirror the outside world, yet he rarely notes what's taking place. Even the book he writes is a rather mundane analysis of the Wars of the Roses through the eyes of a royal figure.

The politics is injected from outside. At one point PJ falls in love with a prospective Labour candidate whose radicalism and despair at Ramsey MacDonald contrasts with PJs. Yet, inevitably, she is dragged into Bamfylde's black hole, rather than breaking PJ from its stiffling, repetitive calendar.

That said, the book is readable, if dated in places. There's quite a lot of sex, talking about sex, and thinking about sex. In fact I'm not sure if the author in his repeated mentions of contraception and sex transposed the latter years of the 1960s back onto the 1920s. I'm not enough of an expert on the period, but it didn't quite ring true in places. But what carries the reader along is of the course the soap-opera story which pulls boys in and then spits them out, with a wry anecdote along the way. Delderfield likes to lay on the nostalgia and the sentimentalism, and at times this hangs heavy. But it must be said he does it well, and PJ's despair as war arrives again and he watches another generation of young men head off, is poignant. But readers may have to ignore the coincidences and amazing good luck that PJ has so that the author can keep the plot going.

What is missing for me is a real sense of class. When PJ returns to his home town he does so as an outsider. He's already been pulled away from the mining communities into a world of the middle classes and lower upper orders. It's an isolated world, which has adopted him, and shaped him in its own image. PJ came remain a liberal, but he's not really that different. It's most notable during his experiences in the 1926 General Strike when PJ's greatest concern is getting back to Bamfylde to make sure everyone is ok.

One final thing must be noted. Anyone who has read Goodbye Mister Chips will not help but notice the very close similarities to James Hilton's classic. Key plot points (including the General Strike) and many others are replicated in Delderfield's book. At times the reader might think one had copied the other, but actually I think it's more to do with the limitations of the subject matter. There can only be so many ideas for events taking place at minor public schools in the interwar period. Slightly dated, and at times overly sentimental, there are worse novels out there, but few that try and cover so much ground in such a readable way.