Glyn Robbins - There's No Place: The American Housing Crisis & What it Means for the UK 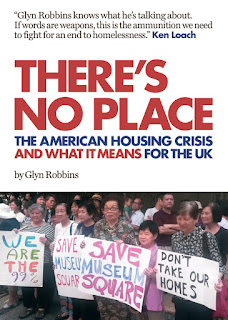 Glyn Robbins' There's No Place was published just before the Grenfell disaster and Hurricane Harvey hit Houston, so it is incredibly pertinent for understanding why both those events were such disasters for poor, working class and predominantly non-white people. By studying eight widely different US cities with their correspondingly diverse examples of housing, Robbins' exposes the UK's own housing crisis and the frightening direction that public housing may take if policy continues to emulate the US mindset.

At the heart of Robbins' book is an expose of how public housing has been transformed by both US and UK governments. Writing about the "founding principle" of UK council housing, he explains:


it was designed to meet general need and available to anyone, irrespective of income. This universality was never part of US public housing and has contributed hugely to its character and problems. Similarly the UK [Housing and Planning]Act  hopes to eliminate the permanent tenancy agreements that most council tenants have had since the 1980s. Thus the Tory government launched an assault on the qualities that have made council housing the most secure, affordable and popular form of rental housing in the UK, hoping to move it towards the conditional, marginal and transient condition of its US equivalent.

The dismantling of the UK welfare state by successive Tory and Labour governments has seen a transformation in the fortunes of council housing - "The proportion of council tenants has fallen from 30 percent of households in 1979 to eight per cent in 2015". As Robbins' explains, this has gone hand in hand with a demonization of council housing as something only for the very poor and dispossessed, with a suggestion that only those who have failed live there. This is contrasted with the aspiration of private home ownership which is seen as being successful.

As he explores the different US housing experiences, Robbins' places the UK experience in a wider context. The rush to build expensive apartments, demolish social housing and push out working class communities from expensive inner-city land is certainly not confined to the UK. Nor is the way that landlords use every available loophole to squeeze as much rent from their tenants as possible. Just as the Tory housing Act seeks to undermine permanent tenancy rights to make it easier to push people from their homes, US rules have aided the landlord over the renter. So as communities are broken up and pushed apart, and rents rise, cities are transformed into spaces for the wealthier population. Writing about New York, Robbins' concludes:


Distilling the housing essence of New York City is almost impossible. But the hidden truth about the ultimate capitalist city is that it's dependent on non-market housing. It could not be the dynamic diverse place it is without the combination of public housing, rent control and various other forms of sub and non-market accommodation that enable people from a variety of economic backgrounds to live there.

The assault on public housing is not simply about profits for landlords, or companies that want to erect huge steel and glass palaces on former historical housing, it is ideological as well:


Implicit within current US and UK housing policy are two shared and inter-linked ideological objectives. First is the attempt to destabilise and destroy any sense of entitlement that exists around non market housing.... Second is the attempt to make all non-market tenants pay higher rents, based on the assumption they could if only they'd try harder!

Much of the book is a series of discussions about actual or potential evictions, demolitions and the breaking up of communities, which would make it all a little dispiriting if Robbins' didn't put resistance to these processes at the heart of his story. While many of the activists he quotes have had awful experiences of poverty, racism and state indifference, they have also won some inspiring victories. Robbins' is able to show how communities can be at the heart of fighting for their futures, if only they get organised. That said, it is also essential that state policy is changed. It is not enough to resist evictions or privatisations on a case by case basis, we must also build movements that can win a more rational housing policy, and Robbins' points out that both Bernie Sanders and Jeremy Corbyn reflect this.

There is much to inspire and anger in this short book. In showing how bad things in the US are, Robbins also shows how good things can be with some great examples of how different forms of public housing have worked, and why. But he also sets the reader a task - unless we stop the destruction of public housing, the future for many thousands of tenants will be bleak.

Readers in London can hear Glyn Robbins speak at a book launch of There's No Place at Bookmarks, the Socialist Bookshop on September 28, 2017. Full details here.