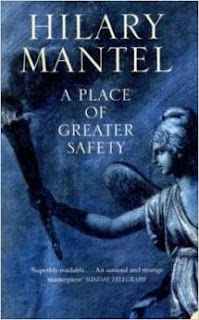 Hilary Mantel's talent for talking historical figures and making them real is put to superb use in this novel of the French Revolution. Focusing on three key revolutionaries, Danton, Robespierre and Desmoulins, she weaves their personal lives and loves into the tangled story of the revolution itself. All three figures played central roles and Mantel brings to life the fierce debates that the revolution throws up - the question of violence in particular, deployed in defence of the revolution's gains.

Unfortunately this sharp focus on three individuals means that the mass who made the revolution remains just that - a mass in the background. Occasionally the crowd bursts into the story, but only to highlight the role of one or other of Mantel's heroes. This doesn't denigrate the story, but it means that those trying to understand the dynamics of the revolution may find the twists and turns of history hard to follow.

Ultimately the revolutionary leadership was successful or unsuccessful dependent on what the masses thought of their actions. That they remain a hazy mass off stage in this novel undermines the historical story.

Mantel remains ambiguous on the Revolution itself. Was it good or bad? Much ink is spilt telling the story (the King isn't even executed until page 604) but the reader is left to judge history on very much a personal level. Having made such excellent use of the historical material, famously writing that the more unlikely something seems to be, the more accurate it is, Mantel left me wanting more on what took place and why. For that, the reader should turn elsewhere.

Posted by Resolute Reader at 9:45 pm

The King and the Tudors did not face the force of the masses shaping history. So in Wolf Hall you feel you get the whole story, But a revolution where the masses entry the stage of history. ...?

Mantel had me confused, I kept having to check who was who as the story twists and lives cross.

After the Queen is carried off in a cart to face the chop, I felt the book was over.