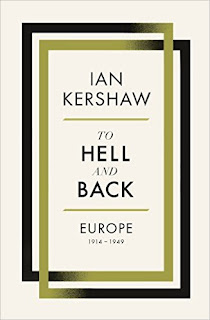 Part one of Ian Kershaw's two volume history of Europe in the twentieth century covers some of the most violent and barbaric periods in humanity's history. In particular Kershaw looks at why the First World War led to the Second World War - arguing that there are three key factors in the period after the end of of World War One. These are the rise of nationalistic movements across Europe, the crisis of capitalism (which he notes many contemporaries, not just those on the left, saw as the final crisis of the system) and the class struggle, particularly in the aftermath of the Russian Revolution.

Kershaw's task then, is to argue why it was that in some countries fascist, or anti-democratic forces rose and in others they didn't. While Kershaw's history is readable and comprehensive (he never neglects events in countries that are not normally part of mainstream histories of Europe) he tends to deal with generalities that mean sometimes his analysis can seem shallow. One major problem I had was that Kershaw tends to lump the revolutionary left together with the anti-democratic practises of the far-right and fascist movements. This is because he argues they were both revolutionary movements dedicated to the over-through of the existing order and the creation of a new one. The problem with this analysis is that it assumes that the revolutionary organisation of Lenin and the Bolsheviks in Russia, and other movements across Europe were opposed to bourgeois democracy without having a democratic alternative - neglecting the revolutionary democracy of workers, soldiers, sailors and peasants councils and Soviets.

Kershaw is too good a historian to argue that Lenin led inevitably to Stalin, or that Stalin's view of socialism was the same as those of thousands of ordinary revolutionaries. But this weakness means that his only alternative to the totalitarian states that rose in Germany, Italy and Spain (and he includes Russia as well) was parliamentary democracy. Parliamentary democracy was of course something worth defending in the face of fascism (notably something the Bolsheviks did at the time of Kornilov in the summer of 1917) but it was also a system that filed millions of people - as Kershaw shows in his careful studies of the reality of life in the 1920s and 1930s for millions of people across Europe.

At specific points in the period Kershaw is discussing, there was the potential for the left to break out and build a revolutionary alternative, or at the least the beginnings of one. Kershaw notes that the best moments for this were when the revolutionary left (essentially the various Communist Parties) and the social democrats united against a common foe. He bemoans the failure to do that in German and notes how important it was to stopping the growth of fascism in France. But his lack of clarity on the limitations of Stalin's politics means that he sees this unity inevitably failing as the left cannot find common ground other than opposition to fascism.

These important criticisms aside, Kershaw never pretends to be writing a revolutionary socialist history of Europe. What he has written is however very useful as he covers enormous ground, from the changing role of women, to the growth of trade unionism, the repeated failure of capitalism to escape economic crisis as well as fascinating summaries of popular music and the importance of the growth of radio and so on. Readers who have a detailed knowledge of particular periods, or aspects of European history will no doubt find omissions, but in as a general introduction this book is very useful. It's worth noting that while painting a general picture across Europe, Kershaw never forgets the role of the individual, nor the impact of these events on ordinary people. There are many anecdotes, funny, inspiring or painful that illuminate the big changes taking place.

There are of courses places we will disgree. I think Kershaw is probably too soft on the failure of senior members of the Catholic Church, particularly the Pope, to condemn the Holocaust. I think he gives to much credit to the Pope and underestimates the importance that him speaking out would have had. That said, no reader will be able to read Kershaw's detailed discussion of the two world wars, the rise of fascism and the Holocaust, or the impact of ongoing economic crisis on ordinary people without drawing parallels with Europe today. As we once again see the rise of the far-right in many countries and ongoing economic crisis I would argue that we need to build a stronger revolutionary left capable of working with much wider forces to build the struggle for a socialist alternative to capitalism. Ian Kershaw wouldn't necessarily agree with me on that, but his book is one full of insights that will encourage the reader to think more widely on how we can defeat racism and fascism today.