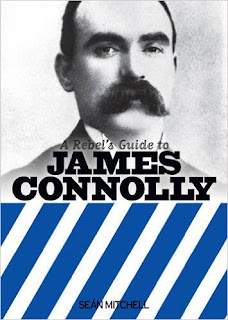 The excellent Rebel's Guide series from Bookmarks Publications continues with a timely publication of Seán Mitchell's A Rebel's Guide to James Connolly. This examines Connolly's life, his revolutionary activity and his politics.

Connolly was born in Scotland to an Irish immigrant family where, Mitchell points out, his early life in one of the poorest parts of Britain, his long monotonous, low paid work as a child and his seven years service in the British Army must have shaped Connolly's revolutionary politics. Mitchell shows that Connolly:


beyond his leading role as a labour agitator Connolly was also a self-educated revolutionary who understood the importance of ideas and theory. He was an avid reader and a prolific writer, publishing not only pamphlets and articles but also plays, poems and songs. He was one of the great popularisers of socialist ideas in the English language, but to communicate with immigrant workers in the US he taught himself rudimentary Italian, and was an avid student of Esperanto - the 'universal' language that many radicals of this time believed would one day unite workers around the globe.

Connolly spent time in the US, as an organiser for the IWW union and revolutionary activist, clashing with American socialist Daniel De Leon over how trade unionists should organise and fight.

But Connolly is most famous for his central role in the struggle to build socialist organisation in Ireland, and the struggle against British Imperialism. Here Mitchell's book is particularly good at making clear that Connolly never separated the two questions. Mitchell writes:


Connolly's Marxism led him to the understanding that the Irish National Question was a social question: 'The whole age-long fight of the Irish people against their oppressors resolves itself in the last analysis into a fight for the mastery of the means of life, the sources of production, in Ireland' (Connolly, Labour in Irish History).

Unlike some in the Republican movement then, Connolly never saw the Irish bourgeoisie or landowners as allies in the fight for liberation. Mitchell explains:


The Irish bourgeoisie, according to Connolly, were not to be trusted. Even if rhetorically they supported independence, in the end they had 'a thousand economic strings in the shape of investments binding them to English capitalism as against every historical attachment drawing them towards Irish patriotism' (Connolly, Labour in Irish History).... As he wrote elsewhere, 'No amount of protestations could convince intelligent workers that the class which grinds them down to industrial slavery can, at the same time, be leading them forward to national liberty' (Shan Van Vocht, August 1897).

As the centenary of the Easter Rising is marked this Easter weekend, all sorts of people that Connolly would probably have damned had he been alive today, are trying to link themselves to that historic struggle. Connolly was executed in the aftermath of the Rising, and Mitchell's book ends with a short account of the uprising, its mistakes, and Connolly's role at the centre of the fighting. Mitchell argues that the Rising had a "reasonable chance of success", and quotes Connolly to show that this was not simply a nationalist rising, but one for the Irish working class, "not the sweating, profit-grinding capitalist".

The murder of Connolly by the British State will remain a testament to the brutality of the capitalists when trying to protect their wealth and system. Mitchell's book is a wonderfully concise introduction to the life and struggles of a man who was prepared to suffer poverty, personal tragedy and eventually death in the fight for a better world. This Rebel's Guide will both inspire and encourage readers to delve deeper into Connolly's writings.

Order A Rebel's Guide to James Connolly direct from the publishers here.

Related Reviews of other Rebel's Guides