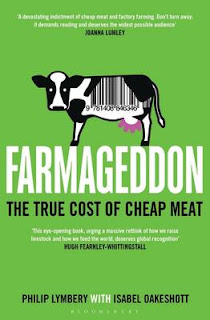 Opening the book at random gives the reader plenty of ammunition to argue for a different, more rational, way to produce food. Take fishing for instance. Lymbery points out that a fifth of all fish caught is used as food for other fish in fish-farming. Some of this fish also is used as feed for pigs and other animals. Our food system spends vast quantities of energy and time producing food sources to fuel other food sources.

This is most apparent with beef. Lymbery points out that if "all the cereals alone currently fed to factory-farmed animals offered directly to people instead of being converted into meat, it could feed a mind-boggling number - as many as 3 billion folk." This represents a tremendous waste of resources, but this isn't simply an incredibly inefficient way of producing food. What this food system also produces is environmental disaster, ill-health in humans and frequently stressful and unhealthy animals.

So Lymbery documents the way that mass factory farming of beef, pigs and chickens in particular helps create the conditions for outbreaks of avian or swine-flu. The way over-use of antibiotics is helping to encourage drug resilience in both animals and people. The fossil fuels that drive the tractors, keep the lights on in the massive chicken farms and produce the pesticides contribute enormously towards climate change and vast quantities of manure threaten eco-systems (particularly in seas and oceans) around the globe.

The author emphasises one thing above all else. Factory farming does not feed the world. In fact, because it sucks up other foods sources to feed animals, it actually undermines the ability to do this. In doing so it encourages (or needs) even more ridiculous solutions, such as the transportation of billions of bees vast distances to pollinate crops because the farms which use monocultural farming and high levels of pesticides have decimated local bee populations.

Lymbery is not arguing against meat eating. What he is arguing for, and demonstrates very clearly, is that meat can be produced in a healthier, more sustainable way. This requires animals to be pastured, and not farmed in an industrial way. The knock on effect will be healthier, and better tasting food. Such sustainable farming will also likely lead to people eating less meat, but given the close links between heart-disease or obesity and high dietary levels of meat this is not a bad thing.

But there is an underlying problem with Lymbery's book. He never quite gets to the bottom of why the agricultural system is like it is. He argues, for instance, that government policies have actively created the current system, particularly in the aftermath of the Second World War. The European Common Agricultural Policy was precisely about encouraging factory style farming. But what is missing is an analysis rooted in the profit motive of agriculture and the domination of agribusiness. This, combined with the way that a high meat diet has been sold to consumers as a mark of social status, is at the root of the problem.

For instance, Lymbery notes the shocking statistic, that 80 percent of malnourished children live in countries that produce an agricultural surplus. Why isn't that food used to feed the hungry? Interestingly Frederick Engels made a similar point in 1865. Why wasn't there enough food he asked?


Not because the limits of production—even today and with present day means—are exhausted. No, but because the limits of production are determined not by the number of hungry bellies but by the number of purses able to buy and to pay. Bourgeois society does not and cannot wish to produce any more. The moneyless bellies, the labour which cannot be utilised for profit and therefore cannot buy is left to the death-rate.

Ultimately people go hungry because the agricultural system is driven by profit and there isn't any profit in feeding the poor.

Lymbery does acknowledge that inequality is a significant problem. He quotes one activist, pointing out that "Soya is a business for the few and an epidemic for the masses". But the book fails to see the system as a whole as the problem. This is why I felt that Lymbery's solutions, rooted in consumer power, were inadequate. We can chose to eat better meat, or more sustainable fish, or even, reduce our individual consumption of meat, but this will not fundamentally challenge the agricultural corporations. His belief that governments act to slowly and corporations can change quickly is in part correct. But state action can force corporations to act in a way that consumer power cannot.

Ultimately though what is needed is a root and branch transformation of agriculture, based on a challenge to the system itself. That isn't pie in the sky either - there are a whole number of examples of peasant producers, particularly in South America fighting for a completely different farming. While I have my reservations about seeing this as the only route to a sustainable agriculture, it's certainly part of a solution that will ultimately require the completely transformation of farming.

These are significant criticisms, but they are made while wanting to encourage activists to read Philip Lymbery's book which is accessible, readable and interesting, as well as brilliant at exposing the failings of our food system and what that means.

Very much enjoyed this review. Is the book still worthwhile for someone who already has a good foundation on the agricultural system and in spite of the books flaws?

Apologies Stefanie for the delay in responding - I've been away for a few days. Yes, I think the book is worthwhile, if only for the detail rather than his solutions. But there are many useful facts and the book brings together the different environmental issues well. I'd recommended it highly.