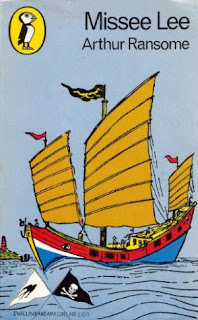 Re-reading Missee Lee after a break of perhaps 30 years, I am struck by how very different it is from the other books in Ransomes' children's novels. This is not simply because it is not a "real" story, in the sense that it is the imaginations of the Swallows and Amazons, rather than an account of their adventures. But its more because the story is centered in an adult world, which intrudes closely upon the enclosed stories that the Swallows and Amazons normally have. For instance, in Missee Lee the "natives" have guns and shots are fired. Execution and imprisonment are real, and the children face real peril that is beyond anything experienced in other stories.

The other great shock is the appalling stereotypical behaviour and speech of the Chinese characters. Ransome was writing in a period when such stereotypes were considered acceptable, but read today the language jars horribly. I don't recollect any such feelings when I read it as a boy, but that's perhaps a reflection on England in the 1970s more than anything else.

The story itself is centered on the events that follow the destruction of the Wild Cat, Captain Flint's sailing ship. He and the children are on a round the world tour, and they abandon ship to land on a hidden group of islands ruled by the pirate Missee Lee. Lee herself is an interesting character, her power stems from being the daughter of the pirate who united the islands, and she plays a careful role, balancing the interests of the other rulers. Educated in Cambridge, she aches for the idolised past that she left behind, and imprisons the children with Latin lessons. Ransome cleverly inverts the roles of the Swallows and Amazons themselves, making childish Roger the expert in Latin who shows up the others.

The danger to the children lies in that they represent England's colonial power. Hearing that John's father is a Captain in the navy panics the pirates who fear that a gunboat will be sent to destroy their island base. Missee Lee wants to keep them forever, and the tensions break open the truce by which the islands remain united.

As a children's novel this is perhaps the least satisfying of the series. The magic of the others was that the children remain mostly closeted from the adult world. Even Peter Duck the other "non-real" fantasy story mostly separates the children's adventure with Captain Flint from the usually distant threat of their pursuers. Instead here the story is all too real, and while there's actually more to it than the other books, I suspect it was a disappointment to the intended audience. As a boy Missee Lee was my least favourite of the series, read only once, while others were repeatedly devoured. Today it feels disjointed and racist, and I suspect will be read far less than many other Ransome tales.

The use of the term "racist" in its ubiquitous, modern, all-purpose sense of an insult is completely misplaced. Indeed practically any book written before, say, 1965, when the word emerged from its original, narrow definition, is quite likely to contain "racist" language, attitudes, characterisations or behaviour. One wonders where modern commentators who use this adjective so liberally (and lazily) think they ought to abandon it: the Tudor or Stewart period? the Middle Ages? the Dark Ages? the Ancient World? For Heaven's sake,how often do they need to be told that placing older societies within the critical framework of modern norms leads to distortions and misjudgements in our understanding of them. My own comments on the English spoken by the Chinese characters in "Missee Lee" would focus on how tiresome it is to read (even more so to write), how inconsistent it is and why the privately & Oxbridge educated Lee, herself, speaks such poor English.