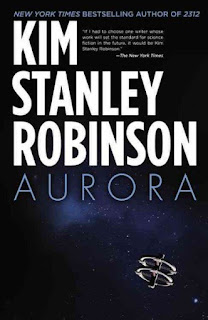 One of the surprising things I found while reading Aurora, is that all the reviews I had read managed to not give away the central plot twist to the whole novel. So I will endeavor to do exactly the same in this brief review, limiting my comments to mostly arguing that this is an excellent novel which is somewhat of a return to form for Kim Stanley Robinson's science fiction after the disappointing and confusing 2312.

Science fiction traditionally overcomes the inherent boredom of long distance space travel by inventing faster-than-light technologies. These "warp-drives" enable space-exploration, colonisation and warfare to become simply galactic expansions of what humans did on the Earth. The reality would, as Robinson points out, be much more mundane. Slow, dangerous, complex and technologically challenging travel that requires decades of time to get anywhere. Robinson doesn't just point this out, he makes a novel out of it. His spaceship, on the way to a moon around a planet around the star Tau Ceti is a gradually failing technological marvel. Bits are breaking off, the lights are failing, there's poison in the soil because the designers didn't anticipate the nuances of closed system agriculture and there's population pressure. It's a race against time for the colonists, descended from the original settlers, to make it to their new home.

Again, ignoring the central plot twist..... *whistles*.... there some really clever themes running through this book. Partly it is an ecological novel. KSR gives away some of his thinking on this early on when he uses the phrase "metabolic rift" a key concept in Marxist ecological studies. His spaceship as a closed system, where natural processes gradually overcome technology's ability to cope, is a clever, if obvious, commentary on our own planetary emergency. Secondly I liked the way that political discussion, political parties and argument were central to the process of decision making. Even if, at times, that descended a little into crude stereotypes.

This is a monumental novel. Some science-fiction fans have felt disappointed by what they see as a pessimistic approach to humanity's ability to colonise the galaxy. But they're missing a wider point that KSR is making - this is not a novel about the far future, but one about today.

I just finished this a couple days ago and loved it! It took me a while to warm up to it though but once I did it was great. I loved the ending!