John Sturt - Revolt in the West: The Western Rebellion of 1549 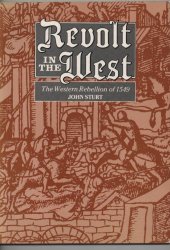 Despite it's short length, John Sturt's Revolt in the West gives an excellent over-view of the events that took place in South-Western England during the 1549. This rebellion, more traditionally known as the Prayer-book Rebellion, saw thousands of peasants, rural labourers led by key figures in the gentry in open revolt against the Lord Somerset and King Edward VI's protectorate.

While noting that the rebellion was probably "the most formidable opposition to the Reformation that England saw", Sturt doesn't simply characterise the events as being just about religion. The seeds of discontent lay in much wider issues, that related to changes in land ownership, taxes as well as the events of the reformation. But even these often had economic and political overtones.

But the bulk of this book is a detailed narrative account of the rebellion and its military defeat. 1549 marked the first time in English history that European mercenaries were used against the country's own population. In part this reflected the weakness of the English ruling class at this time; as well as plans to invade Scotland. But it also reflected the fear that Somerset had that the Reformation might be set back.

The formidable uprising in the South-West brought tens of thousands of others into open rebellion. Had this army they amassed not got bogged down in the siege of Exeter, its likely they could have made it to London before Somerset could have mobilised his forces. This, combined with Kett's Rebellion in Norfolk, a second significant rising and other, more minor, rebellions in the Midlands, would have severally stretched Somerset and his forces.

Somerset failed to survive the aftermath of the 1549 rebellions, and one disappointment with Sturt's book is that he fails to discuss wider events in any detail. Nonetheless this is a useful read for those interested in  the more forgotten history of Cornwall and Devon, particularly that sort of history writing that doesn't obsess with smugglers.Visitors to the South-West may get more out of Sturt's book because he helpfully identifies many of the modern locations of events.

Cornwall - Revolt of the Peasantry 1549
Mudd - Cornwall in Uproar
Caraman - The Western Rising 1549
Posted by Resolute Reader at 6:40 pm