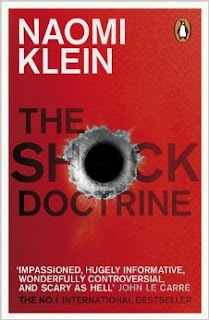 Naomi Klein's recent book This Changes Everything has helped reignite the climate movement and radical discussion of the environment and its relationship to capitalism. Having enjoyed it, I have turned to an earlier book of hers to try and understand more about how Klein sees capitalism and the alternative to it. I began The Shock Doctrine expecting to disagree with her analysis of contemporary capitalism. While I did, in places, I found much to agree with in the book, and many astute and important pieces of journalism.

According to Klein the Shock Doctrine is the way that contemporary capitalism uses chaos and disaster to open up markets to privatisation and more extreme exploitation. In her words,


the coup, the terrorist attack, the market meltdown, the war, the tsunami, the hurricane - puts the entire population into a state of collective shock. The falling bombs, the bursts of terror, the pounding winds serve to soften p whole societies much as the blaring music and blows in the torture cells soften up prisoners.

Using examples from 1970s Latin American to Iraq following Bush and Blair's war, to the aftermath of "natural" disasters like Hurricane Katrina or the 2004 Boxing Day Tsunami, Klein develops a series of examples that show how capitalism has become adept at utilising the aftermath of shocks to destroy public services, privatise nationalised utilities and open up whole economies to the free market.

Those driving these ideas do not do so, she suggests out of nastiness. But out of a belief that what will improve the world is more free-markets and less state intervention. She looks at the economics of individuals like Milton Friedman who "dreamed of depatterning societies, of returning them to a state of pure capitalism, cleansed of interruptions - government regulations, trade barrier and entrenched interests." Klein frequently uses the analogy of torture, and describes the way that experiments in the 1960s tried to see how humans could be "wiped clean" through sensory deprivation. Such human shocks are a metaphor for what the shock of war, or disaster, might do to societies.

I think she stretches this metaphor too far. Though the chapter on how the CIA developed its torture techniques is truly terrifying, not least because of the role that torture has played in allowing the United States to further the economic ideas of individuals like Friedman.

But we should look at some of the examples that Klein uses. Some of them are simply outrageous. In the aftermath of Hurricane Katrina, it is relatively well known that the government closed all the public schools and sacked all the teachers, rehiring some on worse contracts and making them teach in new, private schools. Precisely the sort of education that Friedman advocated. What I didn't know is the extent to which right-wing think-tanks then shaped how the government responded. In part this is the way that private enterprise was deployed to "rebuild". But its not just that government money poured into the pockets of companies like Haliburton giving them contracts to do everything from build new hotels or clear up bodies, but also in the way that such ideas encouraged Bush to do things like suspend the laws about low pay in the region.

Significant sections of the book deal with the Iraq debacle. Many of us involved in the anti-war movement at the time suggested that the post-war Iraq would be built up in the interest of US companies and private enterprise, what Klein shows is far worse. The vision of Iraq was of a country wiped clean of its past, built in the image of a neo-liberal utopia, with private schools and malls vying the the oil money that a grateful population would throw.

Klein also examines some historic examples. The way that in Chile in 1973 the money men overthrew the radical socialist (popularly elected) government of Allende and replaced it with the Pinochet regime. Chile became a laboratory for neo-liberal fantasies, though the separation of economic from political meant that many of the Chicago School economists who had encouraged the opening up of Chile's economy could pretend that the "excesses" were nothing to do with them. The screams of the tortured and the tears of those who lost a loved one "disappeared" didn't reach into the ivory towers of Chicago University's economic department.

However Klein's criticism isn't simply at those who caused the horror. Pointedly she also criticises those whose solidarity work only looked at the violence and neglected the wider impact of the free-market policies imposed on the country. For Pinochet to succeed he had to destroy any potential opposition, and once that opposition had disappeared he was able to drive down wages, destroy services, and remove civil liberties. In Amnesty Internationals 92 page report on the Junta,


It offered no comment on the deepening poverty or the dramatic reversal of programs to redistribute wealth, though these were the policy centrepieces of junta rule. It carefully lists all the junta laws and decrees that violated civil liberties but named none of the economic decrees that lowered wages and increases prices, thereby violating the right to food and shelter

This is a central point of Klein's book. She understands that the violence of the "shock" cannot be separated from the violence caused by the economic and political changes that follow, nor the damage caused by the corruption that inevitably follows.

So profitable has the shock doctrine been that some right-wingers inevitably speculate on what could take place if they could control the shock and chaos. Take neo-liberal economist John Williamson. Naomi Klein quotes him


Whether it could conceivably make sense to think of deliberately provoking a crisis so as to remove the political logjam to reform. For example, it has sometimes been suggest in Brazil that it would be worthwhile stoking up a hyperinflation so as to scare everyone into accepting those changes... Presumably no one with historical foresight would have advocated in the mid-1930s that Germany or Japan go to war in order to get the benefits of the supergrowth that followed their defeat. But could a lesser crisis have served the same function? Is it possible to conceive of a pseudo-crisis that could serve the same positive function without the cost of a real crisis?

Inevitably some suggest that some shocks are deliberate. There are plenty of sites on the internet that argue that 9/11 was an inside job to allow Bush (and by extension Haliburton etc) to get into the Middle East. Klein cautions against this, pointing out that reality doesn't need such conspiracies. The opportunity is always there. 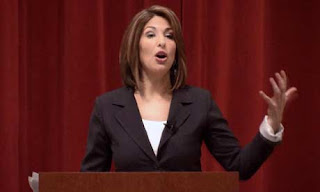 However having said all this I want to add my own note of caution. I am slightly sceptical that the Shock Doctrine is as real as Klein suggests. There is no doubt of course, that the neo-liberal governments that have followed Reagan and Thatcher in the US and Britain have seized every opportunity to impose their vision of a privatised world on the globe. I'm not sure this is any different to what has happened in the past. I'm reminded of the way that British capital entered India, destroyed its markets and impoverished millions in order to expand the profits from its home industry (a story told brilliantly by Mike Davies), or of the way companies have always destroyed competition, used the state to conquer territory or resources or simply changed the world in their own image. Klein herself acknowledged this to a certain extent


The mantra 'September 11 changed everything' neatly disguised the fact that for free-market ideologues and the corporations whose interests they serve, the only thing that changed was the ease with which they could pursue their ambitious agenda.

Secondly I think Klein's alternative is over-simple and doesn't actually guard against the dangers she has so eloquently described. Effectively she argues for a reformist, democratic capitalism, along the lines of Allende's ambition in 1970s Chile, or more recently the radical visions of Latin American governments in Brazil and Venezuela. The problem is that these leave the beast intact. Capitalism will come back and reforms can only blunt its greed. Stopping the neo-liberals means doing more than having friendly left-wing governments. It will mean challenging the system that breeds war and economic crisis.

I also think Klein is weak on the way that "shocks" can demoralise those best placed to stop the imposition of neo-liberal policies. Her example from the UK, where Thatcher used the 1982 Falklands War to destroy the miners and introduce privatization doesn't fit the facts. The War got her elected, but it was the failure of the trade union leadership that ultimately led the miner's strike to defeat - not a shocked union membership who, on the contrary, showed enormous organisation and self-confidence. On several occasions that movement nearly brought down Thatcher, rather than it being a completely one sided victory for neo-liberalism.

Klein celebrates the role of social movements in changing the world and notes how, in places, movements have been able to stop the neo-liberal onslaught. She quotes several South African activists who, with hindsight, note that they lacked an understanding of what capitalism would do to them after the fall of apartheid. For me, this is the key lesson. We need mass anti-capitalist movements that understand the nature of capitalism and the state that protects it, in order to build a new society based on a different economics entirely.

Klein - This Changes Everything
Solnit - A Paradise Built in Hell
Posted by Resolute Reader at 10:45 pm