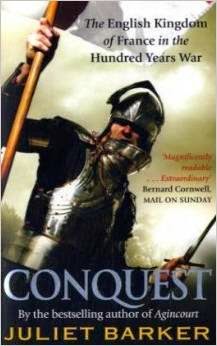 I once heard the veteran British Marxist Chris Harman point out, that despite Bourgeois rhetoric, nation-states were flexible things. The example he used was that for large parts of the 15th century quite significant sections of what we now call France was considered to be part of England. Conquest gives the history of this extraordinary period of English expansion and a detailed account of why it collapsed.

The English Kingdom of France began with the military invasion of France by Henry V. The battle of Agincourt is possibly the most well known part of this history, at least to the English. It led to a period of English military supremacy that culminated in the Treaty of Troyes in 1420. Under this treaty, Henry V married the daughter of Charles VI of France and it was agreed that Henry's heirs would become joint kings of France and England. The dauphin, Charles VII, was disinherited and it was he who, following the unexpected deaths of Henry V and Charles VI, led the French campaign to reclaim the lands ceded to the English.

Henry V's heir, Henry VI was only nine-months and his uncles ruled England and France in his name until he was old enough to rule as king. Juliet Barker is scathing about Henry VI's ability to rule, and indeed, his rule was marked by ineptitude and inexperience, bother from the king and from those around him. As Barker points out the 1431 "coronation of Henry VI should have been a triumphant moment in the history of the English kingdom of France... Yet the whole episode was somehow shabby, rushed and unsatisfactory. At almost every stage of the proceedings the English manage to cause offence to their French subjects."


Henry lacked any real political ability.... he never acquired the independence, judgement and decisiveness of thought that medieval kingship demanded. He had little understanding of the deviousness of others, his naivety frequently leading him to accept what he was told at face value, to the detriment of himself and his country. Her was easily influenced, susceptible to flattery, profligate with his gits and overly lenient in the administration of justice.... Henry showed no aptitude for, or even interest in, military affairs: despite the desperate plight of his French kingdom, he was said to have been the first English king who never commanded an army against a foreign enemy.

It is very clear that Henry VI's failures of military and political leadership contributed to the collapse of his French kingdom. Even before Henry's coronation, the French were making gains. Joan of Arc (who plays a relatively minor part in this particular history) was part of this, but Barker argues that her role was a calculated, but minor part of the Dauphin's campaign to regain his territory. The chapters on Joan of Arc are some of the most interesting. Barker demonstrates how her talents were clearly able to motivate and inspire the French population, but the ruling class was much more cynical about using her and actually sidelined her at times when her desire to press forward was actually mistaken militarily. Joan of Arc's later canonisation has more to do with more modern French nationalism, rather than her importance in the Hundred Years War.

Despite popular culture's portrayal of medieval military engagements, historians often tell us how rare sieges were of castles. This is particularly true of castles of the British Isles. But Barker's history is packed full of sieges, pitched battles and the capture and destruction of various strong points. Notably, betrayal frequently played a role in these defeats. Often defenders were happy to let the enemy in, sometimes out of nationalism, others because of gold. But massive military sieges were a significant and central part of the war.

The war involved enormous armies and cost an absolute fortune. The equivalent of millions of pounds of contemporary money was spent on armies and payments to those who ran the English occupation. Ordinary soldiers however frequently went without pay, and mutiny and desertion were common. It didn't help that Henry VI was extremely poor at money management, preferring to spend lavishly on his friends. At one point Henry VI's "annual income of £5000 (£2.63m) fell far short of what he spent: his household alone cost him £24,000 (£12.6m) a year".

The eventual English defeat in France was not just Henry's fault. Though he had a central responsibility in allowing it to happen. There were other guilty parties at the top of English society, who preferred to line their own pockets, than defend the wider kingdom. Interestingly, Juliet Barker finishes by linking the defeat in France and Henry VI's wider political failings (including popular dislike of his wife) to wider social discontent. The rebellion of Jack Cade that broke out in 1450 was a significant manifestation of this.

Like Juliet Barker's other books, this is a sometimes overly detailed work of history. But it is readable, entertaining and an excellent introduction to a forgotten period of English history.

Barker - England Arise! The People, the King and the Great Revolt of 1381
Royle - The Wars of the Roses
Posted by Resolute Reader at 8:00 pm