David A. Corbin - Gun Thugs, Rednecks & Radicals: A Documentary History of the West Virginia Mine Wars 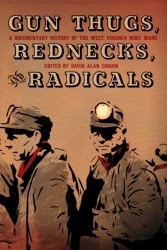 The struggle of workers to be in unions, or to have the right to form unions, has never been an easy one. Employers through the ages have fought tooth and nail to prevent the trade union movement getting a foothold. While unionisation means safer workplaces, higher pay and better conditions for workers, it also means lower profits for the shareholders.

But in few places could the struggle to unionise be quite so violent as in West Virginia in the early 20th century. Here the coal companies could make enormous profits, and as late comers to the table, they didn't have the same agreements with the mine workers.


Due to the favorable conditions of West Virginia as a coal-producing state, the proximity to the Great lakes coal markets, unusually thick veins, and the hilly topography that made the mining easier , and its rapid growth in production, West Virginia was a threat to the organised fields of the neighboring states. It was characterized as a 'pistol pointed at the heart of the industrialised government in the coal industry.' The operators, realizing that unionization meant not only parting with their absolute power as employers but also having their natural competitive advantages pared off in favor of the older fields, vehemently resisted.

What this meant in practice, was violent repression of any attempt to unionise and the establishment of company towns which severely restricted the lives of miners. Here people lived in homes owned by the mine companies, ate food at prices set by the companies, sent letters via company post-officers, drank in company bars and were observed and policed by detective agencies paid by the company.

Inevitably the struggle to build the union involved violence. Guns were a mainstay of life, and shootouts were not uncommon. The Matewan massacre took place when detectives shot down the Matewan mayor who was trying to maintain a semblance of legal order. Seven detectives died as miners shot back at them, while the miners lost two men as well. The sequel too this was equally horrific, as Sid Hatfield the police chief sympathetic to the miners, was due to speak in court. He was assassinated with his deputy on the stairs of the court, in front of their wives. Their deaths detailed in extraordinary detail in the accounts in this book. But alongside their deaths was a growing political and economic movement.

At the heart of the Mine Wars was the Battle of Blair Mountain when up to 10,000 coal-miners marched to protest the conditions and fight for the right to unionise. The army was sent in, but not before the coal-owners had bombed the miners from four aircraft. The troops were sent to maintain order and separate the two sides, but in reality the state intervention served the interests of the mine-owners more than the miners. Indeed, the union itself undermined the miners' own organisation, telling them to return home.

The story of the Mine Wars is shocking. This book is mostly documentary evidence of the period. It includes newspaper stories, interviews and accounts of events, particularly those leading up to the Battle of Blair Mountain. There are some famous figures - the elderly, and extremely inspiring Mother Jones, who refused to die until the mines had been unionised, and was imprisoned and kicked out of towns for standing up and speaking. There are also painful accounts of the poverty and life in company towns, as well as the transcripts of the congressional hearings called to examine claims of violence and massacre.

Unfortunately, while all this material is fascinating, it is difficult to follow for readers like me who do not have prior knowledge of the period. The book could really have done with a longer, framing essay to give the history and a better time-line of events. Despite these limitations I found the book fascinating. In particular it is always inspiring to hear the words of ordinary people, even if they are describing the violence of company thugs. The book also points the finger of blame, and we can read the confessions of the company spies, union traitors and gunmen who took money to help defeat their fellow workers - their names shall live on in infamy. This book will be invaluable as a supplement to those who already know something about the period, but it also has much for those who like oral and social history.
Posted by Resolute Reader at 8:48 pm