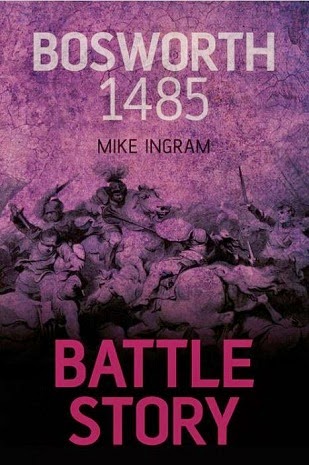 The Battle of Bosworth brought the Wars of the Roses to an end, and installed Henry VII as King of England. For such a momentous event, the battle was itself quite short, involving relatively small numbers of troops (Ingram estimates based on contemporary sources and the known size of the armies, that Richard III had between 10,000 and 15,000 men on the day). Contemporary accounts differ widely on how many casualties there were, but contemporary accounts differ on almost all aspects of the battle. One suggest that Richard III's army lost 1000 men and only 100 from Henry's. Another says 300 on each side, and a final one gives the total dead as 10,000.

These big differences are typical of what we have in the records of the battle. So in this short work, Mike Ingram balances informed speculation with archaeological evidence from recent excavations of the battle field. Amazingly, for such a significant battle, we've only recently learnt were it actually was.

The significance of Bosworth can only be understood with a grounding in the history leading to the War of the Roses. This is less because of the conflicts of the different factions and more because it helps the reader understand why particular lords and nobles lined up on each side of the battle lines.

Ingram also tells us a lot about medieval warfare. Bosworth took place at a time when firearms and cannon were beginning to come into their own, but were still cumbersome. Archers still dominated, but new technologies were coming to the fore. I was surprised to find out that even troops following a particular noble would rarely have the same outfits. No uniforms here, just an emblem and a banner to rally around.

The battle itself was violent and bloody. Medieval warfare was, and Ingram's explanations of how particularly weapons were used might induce winches. A hammer to incapacitate a knight, damaging armoured joints so he couldn't move, then flip the weapon over and use the sharp axe to finish the job.

Given the numbers on the field, Henry should have lost the battle. But Ingram suggests that he masterfully used the terrain and the position of the sun, to give him the maximum advantage. Marshy ground lessened the impact of Richard's artillery, and most importantly for Henry, the troops of the lords Stanley eventually were deployed in his favour at a crucial point in the fight.

The outcome, Richard's death and Henry's crowning on the battle field led to a new era in British royal history. The dead were buried nearby, and the wounded mostly died of gangrene and other infections a few days later. Richard's noble followers were mostly killed at Bosworth and those that remained quickly gave in to the new order, or were executed. Henry VII backdated his declaration of being king to the day before the battle in order to charge his opponents with treason. History rewritten in the process of being made. The spoils of war included a set of Richard's tapestries for William Stanley. He didn't enjoy them for very long, because he eventually turned against Henry and was executed for treason during on the of the final hurrahs of the Yorkist cause, a failed rebellion in 1495. The rather inglorious end to the Wars of the Roses is very well summed up in this excellent short introduction to the battle, which is nicely illustrated and filled with information for someone interested in history, or a visitor to the battlefield.

Royle - The Wars of the Roses
Posted by Resolute Reader at 9:26 pm