Paul N. Siegel - The Meek and the Militant: Religion and Power Across the World 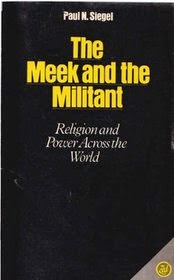 The question of religion has always been an important one for revolutionaries. This important, but slightly dated work, is an essential read for those attempting to understand the historic and social role of religion. Paul N. Siegel's work is from a Marxist point of view. He sees religion, not as a crude counter-revolutionary force which holds back workers and dims their outlook, but as Karl Marx did, dialectically. Religion is both the "opium" of the people and their "heart in a heartless world" offering hope for the future, a better life after death and on occasion, a radical way to interpret the world that can lead to radical action.

Siegel begins by looking at the origins of the Marxist critique of religion, seeing its roots in the French Enlightenment Materialists who came to an anti-religious position through a materialistic understanding of the universe. For those frustrated and annoyed at the contradictions of religion, there are entertaining sections here where Siegel summarises the materialist critique of Christianity. In particular the contradictions of the Bible, which frequently undermine claims of God as a benevolent force for good. There is much to build on in a critique of religion from a materialistic point of view. After all, religion does "foster ignorance", it is conservative, and it has frequently helped to serve the interests of the rich and powerful. The materialists also understood that the origins of religion lay in attempts to understand the universe. But Engels, Siegel points out, adds that only looking at this aspect misses a more important role of religion; that religion also reflects humanity's lack of control over social forces.

"Side by side with the forces of nature, social forces begin to be active - forces which confront man as equally alien and at first equally inexplicable, dominating him with the same apparent natural necessity as the forces of nature themselves... At a still further stage of evolution, all the natural and social attributes of the numerous gods are transferred to one almighty god."

Challenging religion then, means more than simply opposing it, or pointing out its inherent contradictions. Because it has a social origin and role, social change will ultimately be the way that society rids itself of the backwardness of religion. That's not to say that people cannot break from a religious understanding through argument or experience, but it is also true that this is not enough. Siegel quotes Freud,

"It is certainly senseless to begin by trying to do away with religion by force and at a single blow.... The believer will not let his belief be torn from him, either by arguments or by prohibition. And even if this did succeed with some it would be cruelty. A man who has been taking sleeping draughts for tens of years is naturally unable to sleep if his sleeping draught is taken away from him."

Religion offers an understanding of the world to the believer. It also offers a better world in the future, and sometimes, it is the radical language which believers use to try and change the world. The second half of the book looks at the social origins of the world's major religions. In doing so, Siegel shows how religion has often played a dual role. Early Christianity, for instance, offering a radical, revolutionary critique of existing Roman society and a political structure to organise. Siegel traces this role through history, examining for instance, how different Christian sects used different interpretations of the Bible  to push for change during the later years of European feudal society (and early, in some cases). The Quakers, the Diggers, the Levellers and many other Christian sects were trying to re-interpret the world and demand change in various forms. But often, when these movements were defeated,

"having laid down their weapons, they are co-opted and often transformed into the opposites through the influx of new members of different social classes. This process, epitomized in the evolution of early Christianity from a lower-class religion to the religion supporting the feudal structure, is repeated again and again."

But churches often themselves try to hold back the struggle. Siegel quotes Martin Luther King Jnr. during the Civil Rights Movement to illustrate this point, that

"too many Negro churches.. are so absorbed in a future good 'over yonder' that they condition their members to adjust to the present evils 'over here'."

Siegel thus outlines a clear Marxist understanding of the contradictory role of religion historically and, in contemporary capitalist society. His histories of the major religions are both interesting historically and illustrate his main points. While the religion may take different forms, there are many comparative points. Take Siegel's point about Hinduism and Buddhism, which both offer a better future in a future life,

"On the other hand, by performing one's caste obligations one could ascend to a higher caste in a future life and even, as later Hindu doctrine said, become a god... Everything is subject to change - except the caste system, which goes on forever. Instead of the everlasting reward and punishment in another world which the medieval Catholic Church used to maintain the social order, the Brahmans used an eternity of successive rewards and punishments in this world, with some transitory sojourns in another world."

Siegel's broad overview of religious history contains much of interest. The section on the appalling role of the Catholic Church during World War Two is very useful, as is his analysis of the origins of fundamentalist Christianity in the United States. Siegel's analysis of the origins of Islam and its role as both anti-imperialist, but also anti-socialist is also interesting in the light of events in the Middle East since World War Two. It is an analysis close to that of Chris Harman and will, even though it is now very dated, help inform anyone trying to understand the role of Islam today. Siegel also offers useful chapters tackling the question on whether Marxism is a religion (in the sense of a block of ideas passed down from a single, all knowing figure). This chapter feels particularly dated today, but Siegel was writing when the existence of the Soviet Union and the Eastern Bloc allowed a bastardisation of Marxism to dominate. Also interesting is Siegel's study of religion after the Cuban Revolution. If at times the author is soft on the Castro regime, his suggestion that leading figures in that movement had a nuanced understanding of the role of religion is interesting. I was also struck by how contemporary the section on Zionism was.

The final section, which gives a brief overview of revolutionaries and religion is particularly important. Building on the work of Marx, Engels, Lenin and Trotsky, Siegel rejects absolutely the idea that religious people cannot be revolutionaries, or in revolutionary organisation. He also explains how the Bolsheviks, in the early years of the Russian Revolution were able to separate Church from State and to use this strategy to undermine the historic role of religion, an example of not trying to do away with religion "at a single blow".

This important book contains much of interest to the contemporary radical reader. It is a very clear alternative to those, such as Richard Dawkins, who think that being a vocal atheist is somehow enough to be radical (and whose politics as a result frequently ends up being reactionary). By putting the historical materialist method at the heart of his study of religion, and explaining the dialectical social role of religion, Paul N. Siegel's book is a must read.
Posted by Resolute Reader at 8:59 pm