Trevor Royle - The Wars of the Roses 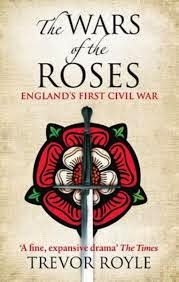 Radicals often bemoan the way history is all to often the history of great men (and occasional great women). The contribution of ordinary people in making the world and changing it is omitted in a version of history that sees only those individuals at the top of society as being important. Kings, queens, generals and politicians are recorded, but those of the lower orders ignored.

This is not to say, however, that such individuals are unimportant. The dynastic conflicts of the War of the Roses helped shape British history, even if these were not conflicts about fundamental change. The various clashes were precisely those of individuals who wanted to take power or strengthen their position. The key position was, of course, King of England and during the Wars, a surprising number of individuals held this role. Trevor Royle's book is a history of that conflict. The Wars of the Roses dominated England for near 100 years and thousands of people lost their lives, usually because their lord or landowner needed them to join up and fight in his interest.

For readers who know nothing of this period, some of it will be surprising. I was quite taken, for instance, at the number of sieges and military clashes between lords over local disputes - for land, debts or other questions of wealth and power. Others might be surprised to find how fluid England itself was. At different times, "England" consisted of large parts of Normandy, with other bits regularly being given to or taken from Scotland.

But the key question here is the dynastic conflict between the Houses of York and Lancaster. Royle roots the story in over a hundred years of earlier history, beginning with the 1300s and the Hundred Years War between France and England, with complicated questions of who governed the country arising mostly from Henry VI's usurping of the monarch in 1399. Ordinary people are rarely mentioned. They don't figure in this history, unless they are soldiers, or part of the occasional 'rebellions' that occur as one lord tries to force out another.

By the time England descends into protracted civil war, there is little political or economic basis to the conflict. In fact, at times, different kings are seen (in the manner of 1066 and All That) as being good or bad. A good king might be one that didn't raise taxes, a  bad one was one that spent freely. Usually though, few nobles who challenged the King dared to do this by accusing him of malpractice. Instead it was his retinue who were targeted as being greedy, irresponsible or practitioners of witchcraft. Trevor Royle writes of one famous monarch,

"In most respects Richard III conformed to the class from which he sprang, he exploited the hereditary principle to get what he wanted and then acted ruthlessly in his own interests and in building up his territorial power, but, shorn of valid support as he was, his violence of mind and action mean that when he fell he fell mightily."

Royle's book makes it clear that none of these kings, despite their rhetoric, had any real interest in governing England to improve it for all. They ruthlessly exploited their position for wealth and power, promoting their family and friends, executing, murdering and imprisoning anyone who stood in their way. At times, Royle's descriptions of how individuals change with the accession of a new King is almost comic - some people leaving the Tower, others being locked up - as though they were on a roundabout.

For those with little heads for dates and the names of kings and rich nobles, Trevor Royle does an excellent job of telling you the complex and interwoven story. Given the number of times people changed loyalties, even in the midst of battle, this isn't always an easy task. That the English nobility seem to only like a handful of names for their children doesn't help with the clarity either. But Royle tells a complex story well.

The battles e describes, were rarely glorious. They were bloody, dirty and ruthless with the losing nobility being executed on their knees in the mud at the end. The battle that put an end to the dynastic struggle, at Bosworth in 1485, was hardly a great affair. While it left Richard III dead and Henry VII as the first Tudor king, this important conflict was little more than the latest in a long line of fights. Royle sums it up well when he points out it was a

"fitting end for a war which had done so much damage and had dominated English life for almost a century: the panoply of kingship reduced to the crown being retrieved from a bush and placed on the victor's head on a battle field whose exact location is not known to this day."

Of such inglorious events legends are made. One might reflect on what this says of the Monarchy in general.