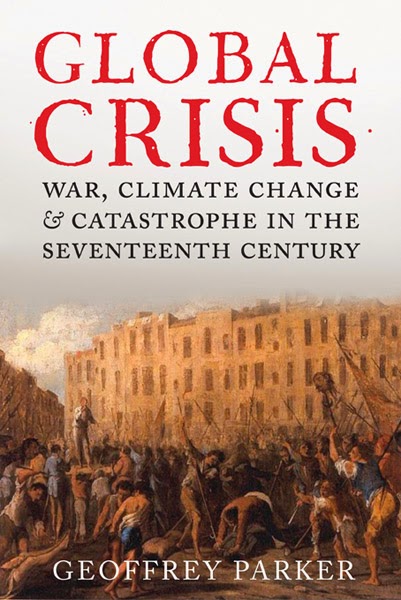 Any review of this extensive book must begin by acknowledging the immense amount of scholarship that has gone into it. Even without the index, notes and bibliography, there are 700 pages of dense text that covers an enormous amount of history. From almost every area of the world, Geoffrey Park has assembled vast amounts of data from primary and secondary sources to tell a history of a period of great change in human history. Using this material, Parker argues,"that the 1640s saw more rebellions and revolutions than any comparable period in human history". For Parker, the "General Crisis" of the 17th century was very different to other eras. The wars, revolutions, rebellions, famines, hunger and death is a consequence of both climate change (in this case, the little ice age) and general crisis in human society. By putting climate at the heart of the story, Parker is distinguishing himself from those historians who would try and remove human history from a wider context. And climate certainly was dramatic during the period under consideration.

"The seventeenth century experienced extremes of weather seldom witnessed before and never (so far) since: the only known occasion on which the Bosporus froze over (1620-1); the only time that floods in Mecca destroyed part of the Kaaba (1630); the coldest winder ever recorded in Scandinavia (1641); and so on."

As Parker points out, the consequences were profound for humans - hundreds of thousands of whom died. And many more suffered greatly,

"Infanticide and suicide in China rose to unequalled levels; far fewer European women married, and others did so only in their thirties; many Frenchmen, their growth stunted by famine and cold, were of shorter stature than any others on record."

Much of Parker's story concerns rebellion. Climate change in the 17th century, as in the 21st, means the destruction of crops, the failure of harvest and the movement of refugees. But what Parker brings out is the enormous unprecedented scale of this. The author illustrates the situation well, linking rebellion and war to the wider climatic changes. Sometimes though, the links are somewhat arbitrary. When discussing the aristocratic plots in Spain against the monarchy, Parker writes

"These events - the first aristocratic plots in Castile for 150 years - took place amid another spate of climatic disasters. In spring 1641 a prolonged drought threatened the harvests of Castile; and in August 1642 a tornado struck the city of Burgos with such force that it destroyed the nave of the cathedral."

Climate and weather certainly do play their role in human history, both on the long scale and with their short-term events. But they are not the only factor and certainly are not always the key factor. The Marxist Chris Harman pointed out that climate change will play a role, in particular by intensifying fault lines in existing society. Parker seems to agree with this, at least in places, for instance noting that the Spanish Hapsburg's tended to worsen the impact of climatic changes through government policies that increased "sovereign debt" and foreign policies that failed to protect the interests of the majority of the population.

During Philip IV's reign in Spain, the country

"suffered extreme weather without parallel in other periods, particularly in 1630-2 and 1640-3; but more than any other seventeenth-century ruler, Philip intensified the impact of climate change by disastrous policy choices."

All this is enormously interesting, and Parker's detailed research illuminates a whole variety of people and places. By emphasising the role of climate and environmental factors we can see similar trends in widely different parts of the globe at the same time. Parker demonstrates how, unlike Philip IV, some countries were able to ride out the climatic crisis through government practice that marshalled resources and directed spending. Its notable that these tended to be countries in the Far East. Parker doesn't fail to neglect parts of the world were there are few written records from the period, notably Australia and South America, relying on the "natural archive" to try and understand what happened to populations there.

Parker should also be applauded for highlighting the role of ordinary people, whose role in the armies, the peasantry and indeed the rebellions of the era helped shape the wider history. For readers schooled in one area of history to see how widespread war and revolution were in the 17th century is particularly illuminating.

However, and its a big however, despite its detailed use of facts, I think Geoffrey Parkers' book fails to explain the real historical dynamic in the 17th century. While Parker doesn't see the climate as simplistically causing war and revolution, he does see it as one factor creating "stress" within society. So when writing about the causes of the English Civil War, Parker points to the fact that the country was a "composite state" and had a "lower political 'boiling point'" meaning that "upheaval tended to arise sooner at times of stress."

The problem with this analysis is that it essentially sees European history as static in the 17th century. In reality, the 17th century, particularly in Europe, but also in China, Japan and elsewhere, was going through enormous changes. This was a period of transition, where the old feudal order no longer worked as capitalist relations were developing. Across Europe, particularly in England and north-western Europe, whole areas were volatile - not because they were composite states, but because different factions in society were struggling to shape society and the future of it. Climate and environment play their role of course. Hungry people may well be more likely to rebel. Those suffering cold and failed crops are more likely to rise up against unjust rulers and listen to the words of radicals.

But this isn't automatic. What makes the 17th century special, is that the development of capitalist relations was at both the top of society and the bottom creating enormous tensions. The English Civil War wasn't caused by a "composite state" unable to react to stress in society, it was caused by the unsolvable contradiction between the old feudal order trying to maintain its power and those who wanted to see a new social order. Parkers' failure to note this means that his book becomes little more than a series of descriptions of different societies and the potential for climate to intersect with other changes to cause war, famine or rebellion. It is notable, for instance, that in a book of near 700 pages in text, the word "capitalism" doesn't make an appearance.

Parkers' book is in no way useless. No student of history could fail to find a great deal material of interest here, and the authors grasp of the sources, the figures and the scale of the 17th century crisis makes fascinating reading. Ultimately though, the sheer quantity of material obscures the wider points that Geoffrey Parker is making, and I was certainly left unsatisfied by the work.

Fagan - Floods, Famines and Emperors
Fagan - The Long Summer: How Climate Changed Civilisation
Posted by Resolute Reader at 10:43 am