C.V. Wedgwood - The Trial of Charles I 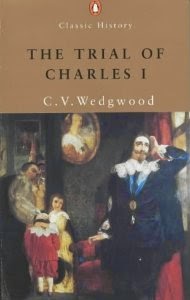 Having read of C.V. Wedgwood's glittering academic career in an obituary I was expecting to find this history of Charles I's trial and execution a tiresome lecture on the evils of the Parliamentary cause during the English Civil War. Wedgwood clearly hailed from the establishment and I wondered if this might show through in her history. Instead I was pleasantly surprised to find a readable and careful history which tries to understand the varying social forces that existed during the English Civil War, in order to understand the reasons that Charles I was put to death.

While Wedgwood's sympathies lie with the monarch, he is in no way absolved in her writing. Her inability to adequately explain the dynamic of this particular part of the conflict between Parliament and King, is not to do with lack of historical research, but is rooted in a lack of appreciation of the revolutionary nature of the period.

The trial and execution of Charles I for treason was an exceptional event. It had far reaching implications, as Wedgwood points out

"Since then, monarchs have perished by popular decree in more violent and far-reaching revolutions, and the conception of monarchy for which King Charles both lived and died has vanished from the earth. Where the institution survives to-day it does so in a form that he would not recognise."

The trial was unique.

"King Charles was brought to trial by his own people, under his title as King - an act which defied tradition and seemed to many a fearful blasphemy... Charles was never deposed. In the charge against him he is described as 'King of ENgland'... the last words of the executioner, uttered without irony, as the King laid his head on the block were 'an' it please Your Majesty.'."

This was a trial that targets not just Charles I, but the very office he held, as John Cook, Solicitor General said, the court "pronounced sentence not only against on tyrant, but against tyranny itself" and elsewhere, "He must die and monarchy must die with him".

But as Wedgwood's painstaking recreation of the trial shows, this was no easy matter. Those attempting to try the King were up against difficult legal barriers. As the King himself pointed out, "I would know by what power I am called hither.. I would know by what authority, I mean lawful.... Remember I am your King, your lawful King... I have a trust committed to me by God, by old and lawful descent; I will not betray it to answer a new unlawful authority; therefore resolve me that and you shall hear more of me."

In other words, the king did not recognise the authority of the court precisely because as the King, he considered it had no authority, and indeed, legally it didn't. The last few years of war and revolution had transformed the institution. The House of Lords wasn't sitting, Parliament was a numerical shadow of its former self. Those who brought the King to trial knew this was an enormous problem. If the King refused to recognise the court, and crucially refused to declare his guilt or that he was not0guilty, the trial would have to end with the King found guilty without evidence being heard. To justify their actions, to proceed with proving that Charles was a tyrant, a man who had brought war on his own people, a traitor to his people, they needed a trial.

There is of course a contradiction. Both sides thought they had right on their side. Charles could appeal to a lack of legal precedent, to his position at the head of English society, to his role protecting the national interest. His prosecuters too, believed that they were doing right. As Wedgwood explains,

"They defied the theory of Divine Right because the saw little in the Scriptures to support and much to contradict it... They invoked the Bible to support their action, but they also declared that the authority of the People was above that of the Sovereign and attempted to show that a King, like any other man, could be tried by the Common Law of England."

If they failed in doing this, and Wedgwood's account of the trial makes it clear she thinks they did, it was because this was an impossible situation under the existing legal framework.

But the regicides did not need the existing law. This was no ordinary court, in effect it was a revolutionary tribunal. While the majority of the English population may not have wanted the king executed, the revolutionary power in the land, the Army, certainly did. This force of 40,000 troops led by Cromwell and his allies, had taken over the government of the country, and the army hated Charles. As Wedgwood points out

"The majority of the soldiers hated him, for making war on his people not once but twice, for trying to bring in foreign troops, or even the wild Irish; hated him for abandoning the Protestant cause in Europe, for persecuting godly ministers in England, for favouring Papists and encouraging the friends of his French Popish wife... More crudely, many of them hated him simply for being a King with soft white hands, fine linen and a velvet cloak who had ordered his poor subjects to be shot and cut down in battle, who had had prisoners beaten and starved and had condemned honest John Lilburne to be whipped at the cart's tail."

The Army, the most powerful authority in the land, had as its political representation, the Rump Parliament and those MPs who remained, even those who did not really want an execution were at the mercy of the interests and desires of those who held the guns. Oliver Cromwell was the political expression of that force, and he and his allies drove through the trial and the execution in the interests of this power. 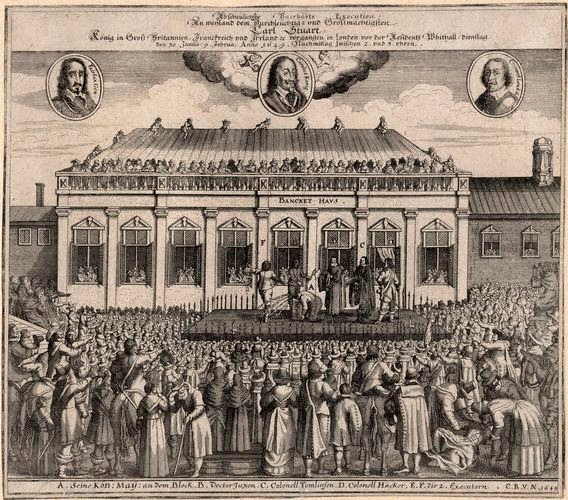 Viewing the trial through the prism of contemporary law, or the English law as it stood in 1649 does not help clarify the processes taking place. Indeed, the reaction to the execution is in itself interesting because it illustrates that wider forces and interests were predominant.

While there was wide "manifestations of grief and respect for the King", this was "not indications of militant Royalism".  As Wedgewood sucintly acknowledges, the execution of Charles I

"had exactly the effect that Cromwell and his more perceptive associates had hoped. It destroyed the active centre of Royalism in England. The King had refused to conclude a peace. Peace could not be imposed without him."

For a population tired of years of war, this was enough.

Wedgwood's account of the last days and hours of Charles I is sad. But Charles spent his last hours attempting to protect the institution of the monarchy - such is clear from his last words to his children and faithful servants. He believed he was heading for heaven, and was more concerned that the monarchy would survive. Ultimately, the monarchy did return, but in a distorted and far less important way. The regicides were persecuted, imprisoned, executed or driven into exile. But, as this interesting book makes clear, they had done their work well, and the world was never the same again.

Note that this book is also published as A King Condemned and A Coffin For King Charles.