Dave Sherry - Empire and Revolution: A socialist history of the First World War 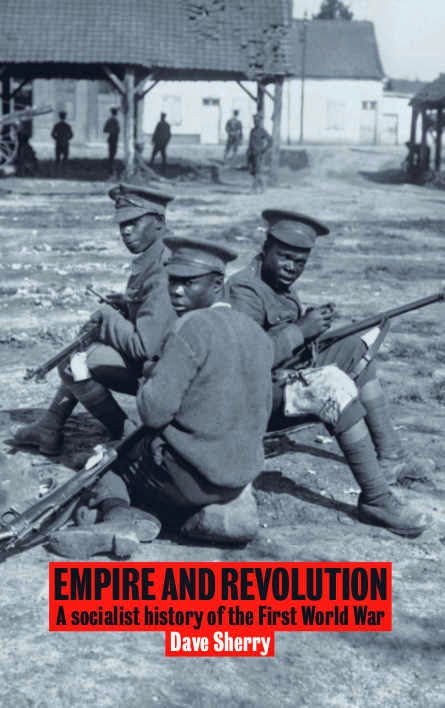 As we mark the centenary of the start of the First World War there are any number of books that tell us the slaughter was inevitable, justified, or simply a terrible mistake. Dave Sherry's Empire and Revolution is one of the few that argues exactly the opposite. Sherry argues that the war should not have happened, because the mass socialist parties that existed in Europe prior to the war had the power to prevent it. He points out that the war had its roots in the very nature of capitalism. Most importantly, he says that the war ended not because of military victory, or because of the economic superiority of one side or the other. Rather, through mutiny, rebellion, strikes and revolution, ordinary people in all the belligerent nations, in uniform or in the workplace, had made it impossible for the ruling classes to continue the war.

Firstly the betrayal. The start of World War One was no great surprise. All the left political organisations knew it was on the horizon. Sherry even quotes Frederich Engels back in 1887 predicting a European war in which "Eight to ten million soldiers will slaughter each other and devour the whole of Europe until they have stripped it barer than any swarm of locusts".

In countless meetings of trade unions, and socialist groups, workers passed anti-war motions. International conferences and national bodies declared for general strikes in the event of war. Yet when it came to it, the vast majority of "official" socialism decided to back their nation state. The greatest betrayal was the German SPD, but our own Labour Party bares its own weight of responsibility. As Dave Sherry writes, despite being allied with the despotic Russian Tsar, the British Labour Party argued it was a war for democracy (even though there was a greater franchise in Germany that in Britain).

"Ramsay MacDonald was a pacifist and when he voiced doubts about the conflict he was deposed by the patriotic trade union bureaucracy and replaced by Arthur Henderson. In 1915 Henderson was rewarded with a cabinet post... It was Henderson who arranged the 1915 Treasury Agreement, by which the unions abandoned many of their defences, including the right to strike."

Sherry argues that the support for the war among the populations of the different country was varied. Initially there was euphoria among some, though this didn't tend to be in the working class districts. Many workers were encouraged by the bosses to join up, others joined up because they would get no unemployment relief if they didn't, "Want and Hunger are, unfortunately... the invisible recruiting sergeants of a great portion of our army" wrote the UKs National Service League.

Once the scale of the slaughter became apparent and shortages begun to bite, many immediately protested. One of the great strengths of Sherry's book is that he brings out how the anti-war movement great, often in parallel, in many different countries. In Russia, Germany, Italy, Britain, France and Austria, within a few years of the war starting, there were protests, strikes and mass meetings against hunger, housing shortages, rents, low pay as well as enlistment. Far from all being in it together, the majority of people were suffering badly, and as the killing continued, the anger grew.

Few commentators at the moment dare to remember that it was the Revolution in Russia that brought the war to an end of the Eastern Front. Sherry tells us the story of how Lenin's Bolsheviks went from being a small, but politically clear group, to a mass working class party through their anti-war agitation and their involvement in the movements during the war. But he also details the mass strikes that erupted in Vienna, Glasgow and countless other places, and crucially, Sherry devotes a section to the German situation.

In 1917-1918 "more than two million soldiers deserted in what one German researcher in the 1920s called 'the hidden military strike'." This was accompanied by growing unrest on the home front, strikes and mutinies. It was the rank and file in the army who "built 10,000 revolutionary soldiers' councils" who helped the the First World War.

But this book is more than the story of how the old left failed to prevent the war and a new, revolutionary left, brought it to an end. Dave Sherry also discusses the revolt in the trenches, the role of Empire and the colonial experience. While I felt this section could have been developed further, Sherry does make it clear that the war was not only fought by the capitalist nations with the aim of expanding colonies and empires, but also required the use of those colonies to continue. By 1918, for instance, one million Indian troops were serving in the "major" theatres of the war. Sherry quotes the historian Robert Holland who points out that this meant, "The true worth of the Indian army to Britain lay in its reserve role that allowed British troops to be diverted to France from East Africa, Palestine and Egypt."

When troops from the Caribbean arrived in France they experienced racism, being forced to work as ancillaries and support troops. When they returned home they became part of mass anti-colonial movements. The best socialists understood that the war was being fought to subjugate the people of the world into the various Empires. Indeed, in the aftermath of the conflict, Britain added millions of square miles to its territories.

Sherry concludes the book by arguing that learning the true history of the war is not just to celebrate those who opposed it. But to learn the lessons of their victories and defeats to build a movement against the capitalist system that breeds war, racism and imperialism. He contrasts how in February 1917, the Bolsheviks in Russia at 20,000 cadres. In Germany, the revolution that lost, there were barely 3000 revolutionaries, ones who "had no united organisation, no tradition of working within a common discipline, no way of arriving at an agreed strategy or tactics". Dave Sherry's book then is important for learning the truth about what happened between 1914 and 1918. But it is also an essential tool in trying to build socialist organisation today.

It could be argued that the war started because the monarchs,the aristocrats and the generals of Europe - the people who controlled the armies - were clear that they wanted to maintain the status quo.
Certainly the Kaiser wanted to build an Empire and his generals wanted to expand German rule across Europe, but they were confused about how and when to do this. The Archduke's assassination and the subsequent squaring off by various nations in line with their treaties, enabled ten million people to be killed. Another dreadful calamity for ordinary humans caused by their leaders.....