Madge Dresser - Black and White on the Buses: The 1963 Colour Bar Dispute in Bristol 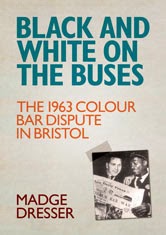 Recently I took part in a demonstration in Liverpool organised by the trade union movement. It as organised by Unite, and was a protest against fascism. Over the years I've been on any number of anti-racist protests that have been put on, or supported by trade unions. In fact, it's probably true, that if an anti-racist group in Britain wanted to find support for a campaign, protest or event, they would approach the union movement and almost guarantee a sympathetic hearing.

This hasn't always been the case. In fact, it took years of campaigning by union members to make the trade union movement into the anti-racist force that it is today. One small part of that struggle was the Bristol Bus Boycott of 1963. The campaign is brilliantly recounted in this pamphlet by Madge Dresser, originally published in the 1980s and republished now for the 50th anniversary.

In the post-war years Bristol had been a destination for many West Indian immigrants. As one participant points out, that was entirely fair, given that Bristol historically had grown wealthy on the slave trade. These immigrants experienced many forms of racism, from being bared from accommodation, to physical violence, or prevented entering particular venues. Specifically, they were also prevented as working as crews on Bristol's extensive bus fleet. Even in times of labour shortages, highly skilled and employable workers were blocked from taking these jobs. The bar seems to have been implemented by the company because sections of the white bus crews had voted in their TGWU branch to strike if non-white labour was taken on.

Inspired by the bus boycotts of the US Civil Rights movement, the local population, supported by friendly MPs such as a young Tony Benn and the cricket star turned politician, Learie Constantine, organised a boycott. Black and white people supported them, the local newspapers were filled with letters for and against the boycott and students marched in protest. Eventually the company gave in and took on its first non-white conductor, a Sikh, closely followed by several Afro-Caribbean workers. The battle against racism on the buses wasn't over, but a major stride forward had been taken. Madge Dresser takes up the question of whether the bus workers were simply trying to protect their jobs, or were they racist. The TGWU denied later that the union had supported the boycott, but there are a number of quotes here showing that many of the white workers did accept racist ideas. This was not surprising in the context of anti-immigrant rhetoric from politicians in the early 1960s.

The re-issue of this pamphlet couldn't come at a more important time. The struggles of the past can inspire and educate us, but they can also teach us that we shouldn't take anything for granted. Given today's virulent racism towards sections of the population from politicians and the media, we cannot assume that working class organisations will remain immune to this. But we can always remember that united anti-racist struggle can knock back racist ideas and break the hold of racism.

The Bristol Bus Boycott could easily become a forgotten part of the struggle for equality in Britain. Luckily Bookmarks Publications, along with a number of Bristol trade unions and anti-racist groups have republished this pamphlet, together with a new introduction by the author and some interesting contemporary pictures. It is a classic piece of social history and deserves to be widely read.

An anniversary meeting took place recently. Afterwards several of the organisers of the boycott spoke to Socialist Worker. You can read the fascinating interviews here.

Fryer - Staying Power: The History of Black People in Britain
Richardson - Say it Loud! Marxism and the Fight against Racism
Younge - The Speech: The Story Behind Martin Luther King's Dream
Posted by Resolute Reader at 10:08 pm