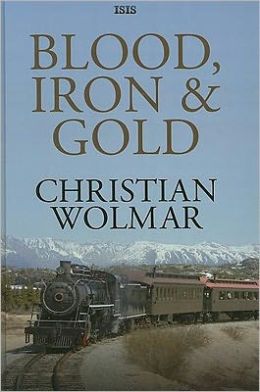 Christian Wolmar is an unashamed railway enthusiast. He's a partisan of the idea that railways should be an absolutely central part of a cleaner, more efficient, better future. And in an era of increasing oil prices, climate change and congestion blighting our cities, who can blame him.

This recent book is an attempt at a social history of the railways. Because it covers some of the ground that his earlier works have, it is patchy in places. For instance he glosses over the early years of the British railroads, while dwelling on the influence that Britain had, through its colonial interests, in the growth of railway systems on every continent. Wolmar says this is not a book for "rivet counters", but a book aimed at the general reader who has an interest in world history, transport and wider social development. Does it work?

There is no doubt that Wolmar crams a lot in. The sheer scale of his story means that much of it passes in the form of anecdotes that leave the reader wanting more. Why did the first Italian railway offer discounts to ladies who didn't wear hats, for instance? On a grander scale Wolmar praises the role of the railways in developing industry and a more modern economy. They were the "most important invention of the second millennium" he argues, that brought the

"Industrial Revolution from a few hot spots to large parts of the world. They were a democratizing force too, allowing people to travel in an unprecedented way, opening up their eyes to the world... relieved many of tedious and hard labour, and spread economic development everywhere."

Taken on its own, this would seem a naive view. But Wolmar is a good enough historian to understand that there are also negatives. The railways contributed to "environmental degradation" (though arguably less than the motor vehicle ever has) and were used to "put down rebellions and wage war" as well as helping make the Holocaust possible.

The problem for me though, is the importance of the railways to human history, cannot be reduced to a simple balance sheet of pros and cons. One has to understand them within the context of wider social systems. In particular, the need for capitalism to make profits and the existence of class divisions in society. Wolmar gets some of this, telling the reader sad stories of class divisions of Indian railways at the time of the British Empire for instance. But this is not enough.

Railways played a particular role in the early development of industrial capitalism, precisely because they allowed a small number of people to move enormous quantities of materials and consequently make bigger profits. Wolmar shows how this was usually only possible with massive state subsidies. Once the railways existed, they had further impacts - transforming the diets of the urban masses, or changing crops that were grown. Notably many railways were set up to move freight, but quickly found people were more profitable. Wolmar's book highlights these questions, but fails in my opinion to integrate them into a more general narrative. Consequently his book reads more as a succession of interesting stories, rather than a more detailed analysis of the role of railways in the development of modern society. Occasionally this drifts close to the realm of the "rivet counter", listing gauges and track speeds so on occasion my eyes glazed over.

There are some striking omissions. Some serious work has analysed the role of the railways during the famines that struck India in the 19th century. Mike Davis' extraordinary book, Late Victorian Holocausts shows how these were the consequences of the priorities of British capitalism. He also argues that railways, while designed to feed the hungry through free market principles, actually had the opposite effect. Sadly this is missing from Wolmar's book. I also feel that the role of the railways in the Holocaust deserved more than a paragraph.

Ultimately these criticisms centre on the nature of social history. In order to write such a history, the historian must integrate their subject with wider historical change, not simply list anecdotes. A social history of the railways that mentions the Russian Revolution means doing more than mentioning Lenin taking a sealed train through Germany. What of the growth of the rail unions? The workers councils on the railways? Trotsky's train from which he led the Red Army? The role of rail workers in mass strikes?

That said while Wolmar mentions on a number of occasions (far more than many other writers might) the role of workers in building the railways and keeping them running, he occasionally mentions their strikes too. But I think he underplays the significant role that the railways have played in working class struggle precisely because they are a central feature of industrial capitalism and bring together large numbers of organised workers. The railways helped keep all sides fighting in World War One. But they also spread the Russian and German revolutions around those countries. The strikes of railway workers from South America to Asia have often provided a catalyst to wider social struggles - consider the novel Gods Bits of Wood for inspiration here.

Wolmar's books are always interesting, and he is on the right side of the struggle for better, more environmentally friendly public transport. But sadly this book bites off far more than it can chew and feels inadequate.

Wolmar - Fire and Steam: How the Railways Transformed Britain
Wolmar - The Subterranean Railway
Posted by Resolute Reader at 9:25 pm