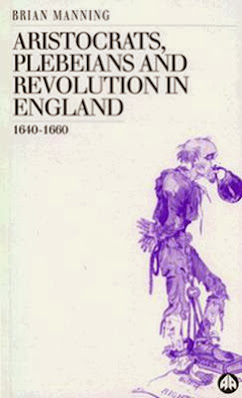 The English Civil War is a contested period of history. For many, it was simply a falling out amongst the English ruling classes, for others a religious conflict. But most agree that the Civil War was not a class struggle, let alone a Revolutionary period. Brian Manning argues against this. His book, is a short but detailed examination of the different social forces active in the early to mid 17th century and the class struggles at the heart of the English Civil War. It was a contradictory period at times. The lines of conflict didn't simply break down into rich on one side and poor on the other, as Manning points out:

"The parliamentarian party was suffused with anti-aristocratic feelings even through it was led by aristocrats, and indeed partly against their leadership. These feelings distinguished those of the 'middle sort' who became  parliamentarians from those who remained neutral or joined the royalists."

Manning understands however that as the English Civil War unfolded, ideas were transformed. Those in the Royalist party were trying to protect the status quo, those opposing them were fighting for a different sort of society, but what that society would be, was open to interpretation. Much of this interpretation took place through religious ideas. The "Bible provided most of the idioms and images by which people tried to understand the world in which they lived" and "the most accessible materials for constructing an alternative world-view".

On both sides, Manning argued, popular movements developed in support. But these ideas developed and were shaped by all sorts of factors. "Class antagonism between 'the people' and the aristocracy surfaced in certain areas, especially clothmaking regions, but by no means everywhere." But the process by which the Civil War takes on a class nature rests on the middle sort of people. The middle sort where based "in the class of independent small producers", some of whom "were rising into capitalist employers and others were declining into wage-earning employees".

Thus the Civil War takes on a revolutionary form as the expression of the struggle for different class interests. Those who began the struggle against the King started by demanding restrictions on his ability to raise and spend money, as well as some say in the use of the country's wealth. They ended up changing the structure of society to make it easier for their classes to operate.

It is too simple to see the struggle as the masses against the rich. Manning's emphasis on the revolutionary role of the army, which "in order to become a fully revolutionary force... needed an ideology, [offered] by the Levellers" is important. But this wasn't revolution for those at the very bottom of society. Struggles against enclosures, the reclaiming of land and the redistribution of common land were opposed by both the Royalists and the Parliamentarians. Indeed the "unfinished revolution" which failed to completely transform English society meant that after the Civil War had ended, "the mass of the population still consisted of peasants and most of them were not radicalised by the revolution."

Manning explains that this might not have been the case:

Had radicals given leadership directly in the localities to discontented peasants it is possible that a revolutionary agrarian movement might have developed and destroyed the economic power of the aristocracy.

But the few peasant movements that did arise tended to do so against both sides to protect their resources from the marauding armies.

Brian Manning's book is an excellent introduction to the class nature of the struggles of the English Civil War. It highlights that the war was more than a military conflict, it was one that had its roots in the changing nature of English society - the emergence of capitalism in the face of the old feudal order. It's detailed analysis of the class nature of the two opposing parties, their political and economic interests, as well as the role of the church is one that all students of the English Revolution must read, even if they don't accept it.