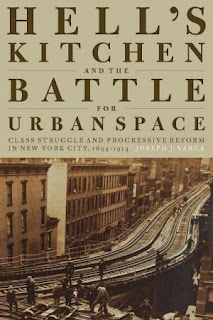 In the period this book considered, Hell's Kitchen, or "Manhattan's Middle West Side" was considered by many commentators to be an area of poverty, corruption, crime and unsavoury types. In reality of course it was a home to thousands of working class people who carved their own lives out of the limited opportunities that they had. Writing in 1912, a social worker sums this up;

"[Hell's Kitchen] has been known for many years as the scene of disorders, of disregard of property rights and public peace. Certain it is that in the minds of New Yorkers who live outside the district... as well as in the minds of the police... there still lingers a tendency and doubtless a liking to think and speak of the district by the name that disorders, rioting and crime won for it."

Subtitled, Class Struggle and Progressive Reform in New York City, 1894-1914, Joseph J. Varga's new book is a detailed examination of the development of this district in New York, but more importantly, an attempt to understand, using the concept of the "production of space" how that urban space was shaped and, in turn, shaped those who inhabited it.

Varga notes that one "useful approach" is to consider the different vision of land use envisaged by those who live and work in a space and those who wish to exploit it for profit, or "between those 'planning and organizing themselves to make money' though the increase of aggregate rent levels, and those striving for 'affection, community, and sheer physical survival'."

In this, perhaps its simplest form, the books' discussion on the production of space in Hell's Kitchen could be an extreme metaphor for all those urban areas being "developed" and reshaped to produce accommodation for those with money, while the mass of residents are pushed to the fringes of urban areas. However Varga takes this further. In Hell's Kitchen, the production of space

"meant different things to different people. Accounts gathered from residents show how categories such as ethnicity, class, race and gender could bring one to a sense of space, but also fragment those same categories." 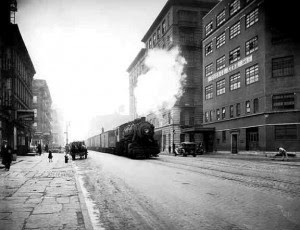 So there were numerous factors shaping the space of Hell's Kitchen, and in turn shaping the population. Some of these factors were imposed on the population by changes that had taken place many years previously. For instance steam engines ran to and from the docks on the roads through Hell's Kitchen. Included in the book is a fascinating picture of a steam train running through the middle of a main road while children play on the pavements. This juxtaposition of different spaces helped to earn some of the roads nicknames such as "Abattoir Place" or "Avenue of Death". Local campaigns to change meant battling the powerful dock and railway companies and took decades, and many deaths, to win change. (As an aside it's interesting that William Cronon's excellent history of Chicago mentions similar issues.)

The docks themselves, like all workplaces, were also centres of battles for space. Several excellent chapters look at the working lives of residents, the women working in linen and textile industries, the men on the docks. These tell stories of the battle for dignity, decent wages and improved conditions, as well as standing within the wider community. One quote describing life for casual dockworkers rings earily true as tens of thousands of contemporary British workers are living on "Zero Hours Contracts".

"Daily employment for dock workers was determined by the 'shape-up' in which experienced workers gather to be called to work... based on the arrival of a laden ship... As the telegraph message announcing the imminent arrival of a ship is received, a flag of arrival is raised on the pier, and word spreads among potential workers that 'the flag is up; and a crew needed... the call to shape up beings men together in the open space in front of the pier... The men jostle for position, joke and occasionally scuffle, and await the decision on who will be called to the crew. Stevedore foremen call men based on experience, reputation or on recommendation. In certain circumstances workers pay kickbacks to hiring agents who guarantee them a working day."

Varga looks at one narrow area of a city. But he recognises that what takes place in that space cannot remain isolated from external factors - government policy for instance, or the decisions of the Rockefeller institute. He concludes that "the production of urban space, though often unduly influenced by powerful spatial coalitions, is the product of a variety of factors that often exceed the ability to control it, and is affected by numerous overlapping networks of forces that do not socially construct "reality" but produce sites for often incommensurable actions".

In other words, in a quote from Marx that Vargas is fond of paraphrasing, "Men make history, but not in circumstances of their own choosing". That said, space itself, Varga points out, has a history, that may be independent of human interaction. Wooden piers rot, land changes, rivers alter their courses. The interaction between these internal and external elements is key to understanding how urban areas, indeed human ecology, alters over time and space.

Hell's Kitchen is not an easy read. At times the language is extremely academic and references abound to other academic studies and books that the casual reader is unlikely to have encountered. Those looking for an introduction to the social history of New York, or Hell's Kitchen itself, will have to start elsewhere. Those trying to get to grips with the application of spatial theories to urban areas through the use of historical evidence will find much of interest here.