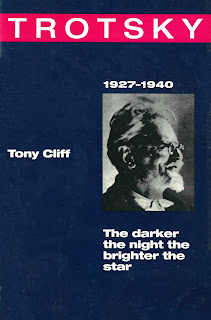 The last thirteen years of Leon Trotsky's life, documented in this fourth volume of Tony Cliff's biography, are among some of the hardest of the Russian revolutionary's life. The book starts with Trotsky in internal exile, having been defeated by Stalin's faction. It ends with his murder in near political isolation. Having led millions of revolutionary workers, created and then led the Red Army to defeat the hostile imperialist powers in the Civil War, by the end of his life Trotsky finds himself isolated, with a few hundred followers in the newly formed Fourth International.

There is little in this book that deals with Trotsky's actual life. Cliff does document how Trotsky's family suffered. Children and grandchildren, even those with no interest in politics, are imprisoned, murdered and denied medical treatment by Stalin. In a brief passage dealing with Trotsky's personal feelings, Cliff quotes the anguished statement made by Trotsky and his wife after their son is murdered by Stalin's thugs.

But the vast majority of this book deals with the political activities and writings of Trotsky. Trotsky was a lifelong revolutionary, a committed Marxist. To attempt to write a biography of him that dealt with this period and didn't concentrate on his political activity would be impossible. In fact, in March 1935 Trotsky himself wrote:

What was this work? Much of it involved writing. Trotsky was prolific, producing pamphlet after article, followed by books and an endless stream of letters to his friends and comrades. Cliff argues that some of Trotsky's writings during this period are some of the finest Marxist writings ever produced. From Trotsky's extraordinary work The History of the Russian Revolution which details the transformation of the Russian economy, the growth of the revolutionary movement and the day-to-day struggles of the Bolsheviks during 1917, to his extraordinary analytically clear writings on Germany, Spain and France in the 1930s.

The chapters on France, Germany and Spain in Cliff's book are worthy of particular mention. In order to comprehend the brilliance of Trotsky's analysis, Cliff gives us a detailed overview of the situation in these three crucial countries during the 1930s. In particular Cliff details the rise of Fascism and the struggles to stop it. Trotsky's writings on Germany are among the most useful today. He argued that a United Front between the two mass left wing parties, the Communists and the Social Democrats could provide a strong enough movement to defeat Hitler's Nazis. But he also saw this method as winning masses of workers to revolutionary politics. Unfortunately, as Cliff argues, Trotsky had no forces to put this strategy into effect. The German Communists dutifully followed the Moscow line - Social Democrats were no better than the Fascists and the Communists had to resist both. The left, divided was defeated.

"Neither the Communist Party nor the Social Democratic Party paid any heed. If Trotsky’s analysis and proposals for action had been accepted, the subsequent history of the century would have been completely different. Trotsky’s analysis of German events was particularly impressive in view of the fact that the author was removed from the scene of the events by a considerable distance. Still he managed to follow the day-to-day twists and turns. Reading Trotsky’s writings of the years 1930-33, their concreteness gives the clear impression that the author must have been living in Germany, not far away on the island of Prinkipo in Turkey."

But Trotsky wasn't always right. Tony Cliff argues that Trotsky's analysis of the degeneration of the Russian Revolution, particularly as outlined in his book The Revolution Betrayed, remains the starting point for any Marxist analysis of Stalin's Russia. But Cliff argues that Trotsky failed to understand that the bureaucracy that had arisen was a new class, with a new set of collective interests. Instead of simply being a managerial force in society, they were directing and shaping Russian society in their interests. This analysis of Russia as a degenerated workers' state was further weakened when the Red Army invaded Eastern Europe. These socialist societies were claimed, by some of Trotsky's followers after his death, as degenerated workers' states yet their had been no workers revolution to create them.

Cliff, briefly outlines his own explanation for Soviet society post 1920s, as State Capitalist. This is not, Cliff is quick to point out, to denigrate Trotsky's work, but to build on it. Cliff also critically discusses the Fourth International, the international grouping that Trotsky set up. Cliff had been a member of this, but here he tries to explain why the International didn't take off. Cliff asks if Trotsky had a choice whether he should setup the Fourth International. He rejects the approach of those who thought Trotsky could have entered a "watchtower" simply commenting on events. Instead he insists that

"if in these impossible circumstances Trotsky made some mistakes in the way the Fourth International was built – its over-ambitious structure, mistaken perspectives, including the semi-messianic spirit affecting it, let that be. Without trying to build a revolutionary party Trotsky would not have written his brilliant articles and essays at the time, analysing the situation and putting forward the strategy and tactics necessary for working class advance. Without the effort of building the revolutionary international, Trotsky’s contribution to Marxism, which kept it alive and preserved it from ossification, would not have been achieved."

But Cliff concludes that:

"struggling to build the Fourth International, which Trotsky did from 1933 onwards, was not the same as formally declaring its existence, which he did in 1938. The former was absolutely necessary, whilst the latter was almost certainly a mistake."

Volume four of this brilliant biography ends then at a difficult moment. Trotsky's death leaves a tiny number of isolated and weak revolutionary organisations dedicated to keeping the flame of Bolshevism alive. The Second World War and the Holocaust confirm the barbarity of capitalism and the continuing need for socialist revolution. Yet the revolutionary organisations that can led that struggle seem weaker than ever. Yet the great achievement of Trotsky, when many of his contemporaries gave up in the face of Stalin or were murdered on his orders, was to keep that flame alive. The last few chapters of this biography are particularly sharp, in part because they document Tony Cliffs own initial work developing Trotsky's ideas. That today we have, in however small a way, revolutionary organisations in many different countries is in large part because of the work of Leon Trotsky and those he inspired.

Posted by Resolute Reader at 9:18 pm