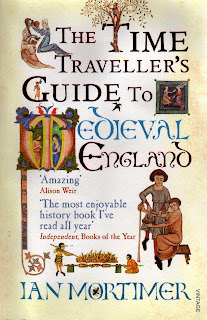 If I am honest, when I first picked up Ian Mortimer's book I assumed it was going to be a gimmicky work
with little substance, designed by some shrewd publisher to sell the maximum number of copies, while telling the reader little more than generalisations about the period in question.

In part I was right. The publisher was shrewd and the book's premise - a sort of Rough Guide for confused visitors to the fourteenth century - is designed with the casual reader in mind, rather than the period expert. That said, I hope lots of people do purchase the book, because it is a richly detailed work of history that is immensely readable and will help a lot of people understand Medieval England in a way that many works of history don't.

So what makes this different. Firstly there is the style. Mortimer is very good and helping you think like a visitor. He encourages you to ask questions about what sort of food you might eat, and where you would stay. Some of these have surprising answers for instance (I hadn't realised just how recently carrots were domesticated into the orange things we know today). Mortimer also doesn't fall into the trap of assuming that we are only interested in the lives of the rich, or those that lived and worked in castles. While recorded history for ordinary people is limited, he has gone to great lengths to help us understand that Medieval England was a place of small towns, many days travel apart, separated by vast areas of lowly populated and often hostile countryside.

That said, Mortimer begins his work with your imaginary arrival at Exeter. From afar you see the cathedral spire, dominating the landscape for miles around and hundreds of metres taller than anything else man made. He describes the smells of "shitbrook" just outside the town walls, were human waste is dumped. He describes the poor children who come to take your horse, the muddy streets and the tiny, dark, buildings.

One of the surprises is that England was not entirely the dirty place were know from history lessons. People did not have any idea of germs, but they did try to be clean. Mortimer tells us that in the lord's hall at least,

"There are strict rules of etiquette to be obeyed. You must wash your hands immediately before every meal. Cut your bread do not break it. When offered a drink, wipe your mouth before lifting the cup."

Mortimer is also aware that the Medieval period was hardly static. On occasion he tells us how customs, understanding, or fashion changed over the century. Sadly, at times his information is fascinating, but there is a serious lack of references. So I thought the following paragraph an insight into changing social customs:

"A man publicly kissing a woman who is not of his family, however, does have sexual connotations and so you should refrain from greeting an acquaintance of the opposite sex with a big kiss in public. Even a peck on the cheek will raise eyebrows".

But Mortimer provides no indication as to "how" he knows this. Is it from a book of etiquette, a medieval poem or something else? How does he know a peck on the cheek will raise eyebrows as opposed to a lynch mob? Sometimes the detail, while arresting, is unbelievable if only because the reader might think it is a guess based on best knowledge.

Sometimes the feeling that Mortimer is extrapolating his beliefs from known facts can be quite strong, for instance, he describes Richard II as unusual for having "hardly any beard at all". He goes on to tell us that "his boyishly clean face contrasts so much with that expected in a king." This is fair enough as it does chime with existing portrayals of the King. What seems difficult to believe is the following sentence, when the author tells us that "The suspicion with which he is viewed by his people for most of his reign is a telling sign of how important it is to look the part in medieval society." Somehow I don't think that facial hair was the only problem for the subjects of Richard II.

In part this is only gripes from this reviewer. Most of the book is entertaining and educative, even if there aren't enough endnotes. The section on health and healthcare is particularly terrifying, though its hard not to stifle a 21st century laugh at those doctors who believed that to cure TB one should "take blind puppies, remove the viscera and cut off the extremities, then boil them in water, and bathe the patient in this water four hours after he has eaten." While the patient is bathing, his chest must be "wrapped in the skin of a small goat".

Anecdotes like this keep the reader reading. But Mortimer's insight is far greater. For instance he notes that medieval England was far quieter. No internal combustion engines, or radios. He speculates that people will listen differently, hearing far better. "When a dog barks, they can recognise whose dog it is. They are more sensitive to voices..."

While Mortimer's concludes by quoting of some random postmodernist telling us that we cannot really know the past as it was, his book does make a good attempt to explain the fourteenth century by contrasting it sharply with our own experiences in the contemporary developed world. I make that final point, because on occasion, particularly when Mortimer describes rural poverty in medieval England, a society almost entirely without healthcare and were peasants constantly worry about the next harvest, I did think about some of the images we see from the developing world in our own time. The past might be a foreign country, and this is a useful travel guide, but for many people today, some aspects wouldn't be that strange.

Tuchman - A Distant Mirror: The Calamitous 14th Century
Pryor - Britain in the Middle Ages: An Archaeological History
Posted by Resolute Reader at 6:30 pm