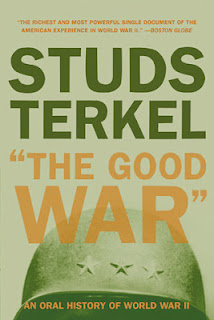 At first sight 'The Good War' simply looked to me like a collection of reminiscences from people who had been involved in World War Two. That's not to demean them, these are fascinating and powerful glimpses of how peoples lives were transformed by that enormous conflict.

The accounts range from young men who pulled the dead and wounded out of the water at Pearl Harbour, to women who went to work in the munitions factories for the first time or Japanese Americans made to spend the war in near concentration camp like conditions. For Studs Terkel a history of the war is far bigger than simply that of servicemen, or those who were victims of bombing, it is the history of a transformation of peoples lives. Nor is it simply a bottom up history. Most of Terkel's collected pieces are from those at the bottom, either low ranks in the services or ordinary men and women working in war industries or trying to survive the conflict. However he also interviews an Admiral or two, and one J M Keynes who was in charge of assessing the impact of the Allied bombing effort, in an attempt to improve in future conflicts.

However, as I read this collection a different structure began to emerge. This is far more than a collection of memories. Terkel builds up a picture of the war that is terrifying. The narrative that emerges is more than simply the story of the conflict, but it is also powerfully anti-war. Terkel makes the point in the introduction, that World War Two is different to many other conflicts. Many of the participants felt that it had to be fought, in order to save democracy from fascism. But if these accounts are representative, many of those involved, particularly the fighting men, came away from the conflict believing that wars should never happen again. Of course there are some gung-ho stories, but time and again, Terkel's interviewees finish their accounts by talking about the war raging in Vietnam and how they want it to end. Several talk of the way that they learnt from World War Two that their government lies, and how they don't believe them over Vietnam, just as they didn't over Korea.

Another aspect to this, is the experience for black Americans (most of Terkel's interviewees are American). The war was fought by a segregated army, whose leaders believed that black people could not and would not fight properly. For the poorest in American society, particularly the black population, the war offered the chance of a job, but it often also meant high levels of discrimination and racism. One officer gives an example of the racism;

"There's a story about Ace Lawson. He tried to enlist along with some of his white contemporaries. This major at the recruiting place told him, 'What are you doin' here boy? The air force doesn't need any night fighters.'"

This type of experience undermined the claims of the Allies that they were fighting for democracy and freedom. Lowell Steward, who became a black fighter pilot points out about this racism that "This is why World War Two doesn't read popular things in my mind. They were fighting fascism and letting racism run rampant."

For many of the women interviewed here, the War transformed their lives. It also sowed the seeds of far wider changes in society. Talking about women going to work in the factory for the first time, Dellie Hahne says:

"For the first time in their lives, they worked outside the home. They realized that they were capable of doing something more than cook a meal. I remember going to a Sunday dinner one of the older women invited me to. She and her sister at the dinner table were talking about the best way to keep their drill sharp in the factory. I had never heard anything like this in my life. It was just marvellous."

The war transformed peoples' expectations of what they should get from society. Indeed things like the GI Bill meant that a generation that might well have continued to live through a economic depression without the economic stimulus of mass military spending, were able to educate themselves and get proper jobs in bomb-time post-war America. But it also opened up peoples' eyes to the world. One GI comments;

"The war changed out whole idea of how we wanted to live when we came back. We set our sights pretty high. If we didn't have the war, in Ploughkeepsie, the furthest you'd travel would be maybe New York or Albany. But once people started to travel - People wanted better levels of living, all people."

Elsewhere in the book, another account touchingly tells of the wonder of a young US soldier gazing at the amazing European cities and even the countryside at the same time as he's fighting off an attack by a German unit.

It is tempting to regurgitate large chunks of the book in this review because Terkel has found such an amazing collection of individuals. I won't do that, but it is worth noting that there is much here for students of history, as well as people wanting to get a feel "for what it was really like". Some of the notable interviews in here are with survivors of the death camps, prisoners of war, and veterans of Stalingrad. The final section deals with the nuclear bomb. Harrowing accounts from victims in Hiroshima and Nagasaki are mixed with the stories of some of those who worked on the Manhattan Project. Some of these are powerful, particularly as many of the scientists really believed that the weapon would never be used.

I will finish with the words of  John H. Grove, a physicist who describes his thoughts on hearing the first atom bomb had been dropped on Hiroshima;

"My instantaneous reaction was elation. Then there was a second reaction. (Whispers) Oh. My God! On a city! I went in and talked to my boss. (Whisper builds to a shout) They dropped an A-bomb on a big city, a hundred thousand or so. Why didn't they drop it on Tokyo Harbor or that great naval base at Truk? Why on a civilian population? My boss was Jewish and he knew about the Holocaust. He said, 'What the hell, they're just Japs. Dumb animals.' I was stunned. Lost all my respect for him."

The ending of the war ushered a new era in. Many of the those interviewed describe their expectations that there would be a inevitable war between Russia and the United States. The attitudes towards the nuclear bomb, the Cold War and the conflicts in Korea and Vietnam however, were very much shaped by the experiences of World War Two. Unsurprisingly this did not automatically mean support for everything the US government said or did, but often the reasons were complex. Studs Terkel's fascinating history helps us understand not just what war is like, but the way that it shapes peoples ideas. 'The Good War', for many who took part, should have been the last war. The fact it was not is an indictment of those at the top of society far more than most of the people interviewed in this wonderful book.

Posted by Resolute Reader at 8:23 pm