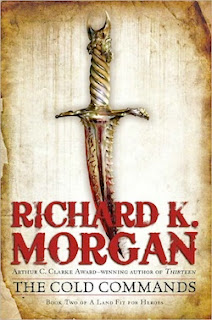 This sequel to The Steel Remains is a very different novel, and if I can indulge myself in a slightly unfair metaphor, I'd label it The Two Towers of what I imagine is going to be a trilogy. It is very much a bridging novel, that develops and continues the themes and characters of the first book and gives greater shape and depth of their worlds, but within which not much seems to happen. Actually, that's not quite fair. A lot happens. A lot of fighting, sex, running around and skulking around in corridors happens, as well as palace macinations and strangers flexing muscles in bars. But not much big happens.

In The Steel Remains we met a trilogy of war veterans. Each scarred and near forgotten by the society they served. They came together and fought off a fantastical threat, the Dwenda. In this novel, the threat returns, but is almost un-noticed until the very last pages. In fact Morgan is so concerned with setting up the plot-lines for volume three that the plot-line in this book seems to barely exist.

There are some great set-pieces. The central character, Ringil Eskiath destroys a slave-caravan in a classic piece of revenge. The following scene though, is a very harrowing gang-rape, as Ringil uses his mercenaries as a weapon again the mistriss of the caravan, a character who is also related to him. The scene is fairly awful and almost made me give up on the novel. Richard Morgan presumeably thought so too, as he has Ringil curtail it, though he cuts the victims throat to do so.

I've often wondered whether Morgan is trying to be gruesome out of realism for his fantastical feudal setting, or simply because he likes to shock his readers. Frankly this went a little too far. As with the previous novel, there is a lot of sex. Unusually for the genre, several of the most important characters are gay, and the way that they carry their sexuality in a world that is deeply homophobic is one of the ways that Morgan has rounded out his characters. In one scene, Archeth Indamaninarma, a half alien, half human woman who lives in the service of the Emperor, has sex with a female slave, Morgan came close to using one of the worst cliches of the Fantasy genre. Instead he has Archeth debate endlessly about the rights and wrongs of the act, and question her slave deeply before giving in to her charms. If this is meant to justify sex with a slave as somehow being alright, I'm not sure. Nothing about the power-relations in the relationship appears to change and the slave herself admits she's been instructed to fuck her mistress. Hardly likely to tell her that she doesn't want to.

Morgan is clearly trying to write fantasy novels that are above the usual dross, which is of course a crowded field. His 21st century reworkings of some classic themes, do feel different. If only for the blending of science fiction elements into the mix. Like some of his other novels, I found The Cold Commands overwhelming in places. Characters come and go at a rate of knots. Individuals change location and time, moving between worlds in a bit of a blur. They also change. Somehow, at some point on his travels in this novel, Ringil picks up magical powers. Perhaps I was reading a section superficially, but I really didn't understand where this came from. Maybe one of my readers can help me out?!

Overall, I'd suggest that this is a novel that is worth reading. I don't know when the follow-up (I assume there will be one) is likely to arrive, and I fear that I'll have forgotten important details by then. Nonetheless, worth reading if you like your SF&F a little more gritty than normal.