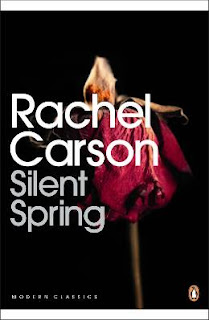 The fiftieth anniversary of the first publication of Silent Spring by Rachel Carson has been covered widely in the media (see this rolling coverage by The Guardian for instance). It seemed a good opportunity to read this famous book, often credited as being the trigger for the modern environmental movement and certainly one that continues to provoke wide debate today. Carson's book is a beautiful read, it is eloquent, learned and funny. To take one example; when describing attempts to eradicate the Japanese beetle from croplands, she describes Sheldon in Illinois. Of which she says, that "perhaps no community has suffered more for the sake of a beetleless world." Carson puts across complex ideas well for the layman readership and it is no surprise that it sold hundreds of thousands of copies in the first few months of publication.

The book concentrates on one key environmental issue - the use of chemical pesticides to destroy insects and weeds, particularly for agriculture. Carson rages against the over-use of the chemicals, she describes how the over use of chemicals like DDT to destroy pests (over 200 new pesticides were created between the 1940s and publication) has led even to a "fad of gardening by poisons" in the United States.

The book is most well known for its expose of the use of DDT. Carson is meticulous in her detailing of the problem. She shows how DDT and other pesticides are concentrated as they move up the food chain, meaning that even when the correct amount of poison is used, animals and humans can suffer overdoses because of the food they are eating. There is a powerful section of the book where she explains how earthworms are the "concentrators" of DDT that is used to control Dutch Elm Disease. This then destroys the robins who eat enormous quantities of worms, leading to the loss of birdsong - the silent spring of the title.

She shows how rivers and streams are destroyed by the chemicals, and describes the impact on the wider ecology. Carson even describes the "spontaneous" formation of other weedkillers, when certain chemical compounds combine in the soil and water.

However there is much more to this book than Carson's dramatic denunciation of this culture of poison. The is an intensely ecological book. By that I mean that Carson's analysis is rooted in an understanding of the webs and chains that form nature. In particular she hates the notion that humans are somehow external to the natural world. She writes eloquently;

"As man proceeds towards his announced goal of the conquest of nature, he has written a depressing record of destruction, directed not only against the earth he inhabits but against the life that shares it with him."

But for Carson this "announced goal" is nonsense. Humans aren't separate from nature, they are part of it, and our actions impact upon the natural world and back upon ourselves. This is why she has to spend so much time discussing the illnesses, diseases and cancers that result from the use of chemical pesticides.

But Carson's analysis isn't simply ecological in the sense that she understands the natural world, she also understands the historic and economic reason that pesticides are used in the modern world. She describes the "treadmill" of pesticides, which we might interpret as the logic of the market - that once you begin using vast quantities of chemicals, it is logically to use more and more of them, due to their decreasing impact, rather than switching to more rational alternatives. Carson locates the pesticides use and promotion within an "era dominated by industry... in which the right to make a dollar at whatever cost is seldom challenged". The pesticides that the US used in the 1950s had their roots in the nerve gases and poisons manufactured for military purposes in the First and Second World Wars. The use of Agent Orange as a weapon against the ecology of Vietnam and its people is the logical extension of this.

Carson also appears to see the problem located much more in the structures of modern society. The insect problem she describes, that requires such enormous quantities of pesticides, arose with the intensification of agriculture, in particular the practise of mono-cropping, which she describes as "agriculture as an engineer might conceive it to be".

Carson's environmental critique then, leads directly to a critique of an economic and political system that has profit as its sole goal. Its noteworthy that Carson isn't anti-science or anti-technology. She is not the environmentalist that argues for a return to a more primitive existence. Indeed her well-argued alternatives are often very technological (involving for instance the laboratory sterilisation of insects to undermine populations in the wild). It is dangerous to draw from this that Carson was some sort of Revolutionary Socialist, though her enemies often described her as a Communist. Other writers like John Bellamy Foster have shown the extent to which Carson's world view was influenced by left wing ideas - see this article for instance. 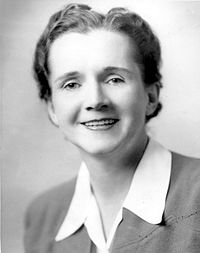 Carson was working and writing in the 1950s and 1960s so it was inevitable that a critique of the priorities of a section of American industry would be highly controversial. Indeed it is noticeable that in many places she draws parallels in her criticism of pesticides with radiation poisoning. At the time the American public was only just coming to terms with the impact of fallout and its links to cancer. So Silent Spring is also a detailed explanation of cancer and how it can result from external environmental influences. Carson clearly believed that an informed public was one that was more prepared to ask questions and protest at what was happening to them.

Carson's work may have helped kick-start the modern environmental movement, but its impact otherwise was limited. DDT and a few other very dangerous chemicals were banned. But pesticides are still used in vast quantities and still suffer from the problems and limitations outlined in Silent Spring. As the world faces even greater environmental problems in the 21st century, Carson's book is important for many reasons, but not least its attempt to locate ecological crises within the framework of a whole system. For that reason alone it deserves a read during the 50th anniversary year.

Carson - Under the Sea Wind
Posted by Resolute Reader at 7:48 pm