Stephen King - Wolves of the Calla 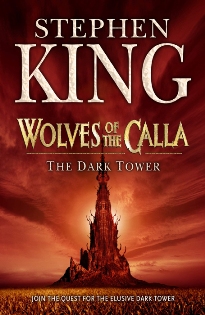 As Stephen King's Dark Tower series progresses, the books seem to take on more of a set piece nature. Rather than feeling like part of an ongoing quest, they appear more like a series of episodes, rather like a soap opera. This is disappointing, because one of the attractive things about the Dark Tower series was the feeling that discovering the true nature of Roland's quest was part of the quest itself. This book, Wolves of the Calla and the previous one Wizard and Glass feel more like self contained adventures that King has squeezed into the wider story-arc.

Nonetheless the book itself works well, as King's writing is tight and enjoyable. In Wolves he is explicitly paying homage to a host of Westerns, fitting in with the wider themes of the series itself. Here, Roland and his ka'tet are protecting a small township, which similarly to that in the Magnificant Seven, is underthreat from a repeated raids by outsiders who steal their children. The children are returned some time later, genetically altered, but having lost their minds. The tragedy is repeated over decades and this time, several of the villagers decide to make a stand.

The best parts of the novel are those that deal with the inter-personal dynamics of the villagers. Those that want to fight, those that see fighting as doomed and those that see any resistance as bringing further tragedy on the village. Indeed one of the most satisfying themes centres on the villager that betrays his friends. The way that King deals with the conclusion to this minor sub-plot is pure storytelling genius. On the other hand King tries to shoe in too much in places and it all gets a little self-referential towards the end. This is epitomised by a very strange Harry Potter reference.

While not the best of the Dark Tower series, Wolves is a must read for those following Roland's exploits. With only two of the novels left I hope that the novels return to the excellence of the earlier books.

King - Under the Dome
King - The Gunslinger
King - The Drawing of the Three
King - Wizard and Glass
King - The Wastelands
King - Song of Susannah
Posted by Resolute Reader at 12:40 pm