John Newsinger - Fighting Back: The American Working Class in the 1930s 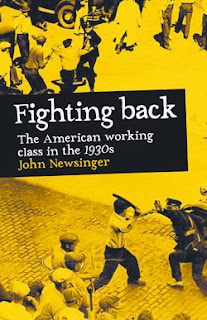 "By the end of the week all the Funsten plants were closed and the strike had spread to the Liberty Nut Company and the Central Pecan Company. In the course of the strike over 100 women were arrested and there were some violent clashes on the picket lines. Carrie Smith, one of the strike leaders and a deeply religious woman, addressed a strike meeting holding a Bible in one hand and a brick in the other. She believed both were necessary to win."

The story of the American working class in the 1930s is an extraordinary tale of mass resistance in the face of violence, racism, cowardly leadership and governments prepared to overlook the murder of trade unionists, socialists and activists in the interest of protecting capitalism. John Newsinger's new book is a detailed and inspiring account of the period that should be read extensively by trade unionists across the world. In its exploration of working class struggles, the need for rank and file action, the power of the "sit in" or "workplace occupation" and his discussion of the role of trade union "leaders" and bureaucracies, there is a wealth of material here to help us today, in our struggles against austerity.

Newsinger begins with the "catastrophe" that was the Great Depression. The Depression destroyed living standards across America, forced millions into unemployment, short term and poverty wages. Many companies went to the wall, profits dropped dramatically. In Europe this lead to war and fascism, as Newsinger points out, the greatest workers movement in history, that of the German working class was defeated with Hitler's rise to power in 1933. The odds were against US workers. The 1920s had been a period of defeat, the ruling class had carefully exploited anti-red propaganda and companies spent fortunes on powerful, private armies. Murder, beatings and lynchings were not uncommon for those trying to unionise workplaces. Even those who were simply members of a union, or talked of its importance could find themselves exposed by company spies, and on the dole within minutes.

The workers' position was further weakened by the ineffectual leadership of American trade unionism. In particular, the American Federation of Labour (AFL) we more concerned with sweetheart deals and keeping a leadership mired in corruption than fighting the workers corner. Their fear of militants, socialists and communists meant that they often sided with the bosses rather than their members.

In the early 1930s, a series of major victories changed the picture. In one inspiring chapter Newsinger tells the stories of the Toledo, Minneapolis and San Francisco, whose workers fought and defeated anti-union companies. Through meticulous organisation, innovated strike methods and solidarity that meant everyone, from wives and children of strikers were involved, they broke the log-jam that was the anti-union shop in massive workplaces. This wasn't easy. In 1934, in Minneapolis, the Governor, a supposed New Deal democrat deployed 4000 National Guards. But the leadership and rank and file of the strike turned this Teamster's dispute with the management of coal yards and other workplaces into a class conflict that placed the future of the workers in the city at the heart of the dispute. Workers responded magnificently.

"The Cooks and Waiters Union sent experts in mass cooking and serving to help organise things and train the volunteer help. Working in two 12-hour shifts over 100 volunteers served 4000 to 5000 people daily".

But what won the dispute and union recognition was more than such sympathy solidarity. Pickets were militant and organised. Phone networks and roving pickets located scab lorries and, where necessary, physically confronted them to stop the strike breaking. In a time when employers would routinely use members of the KKK or provide machine-guns to company goons, no one should be shy of defending such violence. Though notably, the strikers avoided violence when they could. Nonetheless, much of the strikes of the 1930s involved weaponry on a scale that those of us who've been active in the union movement in Europe for the last decade can only imagine. Newsinger's book contains many lists of names of martyrs and victims of the repression. Those names are remembered in forgotten pamphlets and books, rarely are they officially acknowledged by the US mainstream.

Today, many official histories of this period of US history talk of President Roosevelt as being a liberal champion of the oppressed. Newsinger shows how Roosevelt was actually a clear class fighter, a man who sided with the bosses and hated the unions. His attempts to protect capitalism by making small reforms helped open the door to workers fighting for change, but he was a friend of big-business and despite his "liberalism" and apparent dislike of oppression he continued to describe them as "niggers" in private, and refused to support laws banning lynching.

Racism was and is a central feature of US society. Many of the disputes described by Newsinger brought together black and white workers in struggle for the first time. This wasn't always easy, given the levels of popular racism, but often the experience of struggle overcame the differences. As one worker said about a particularly brutal attack on a demonstration "I'd seen them beat black women, but this was the first time in my life I'd seen them beat white women with sticks." The description that opens this review is from a strike that started amongst 800 black women workers who were then joined by several hundred white women.

Towards the mid 1930s, Roosevelt knew that he had to tack left to maintain the Presidency, incurred wrath of big-business and the right, but till his last days he hoped he would be remembered as "The Last Champion of Capitalism". He firmly believed that the New Deal, by blunting militancy had helped  avert revolution and saved American capitalism.

At the heart of Newsingers' book is the story of the 1937 "sit in" strikes. These were lead by a new union movement, the CIO which was lead by John Lewis. Lewis was no socialist, but understood that if the US union movement was to avoid all out destruction it had to give a head to the rank and file. He spoke left wing, employed Communists and Socialists as organisers and give the go ahead to rank and file mass militancy. It had enormous successes, "In 1933 the United Mineworkers had only seven members in West Virginia; a year later they had 100,000". CIO activists were at the heart of the sit downs in car plants in Detroit that destroyed the automobile company's anti-union positions. These were pitched battles, one involved catapults and burning oil being deployed against machine guns and tear gas.

The success of the sit-down lead to near insurrections movements in some cities. Workers in Woolworths, hotels as well as industrial plants found that mass action could win pay rises and recognition. The CIO was happy to lead this, but when the "alternative was escalating class war" they backed down. In several cases, even the CIO was more fearful of losing control than allowing workers to win through.

One of the points that Newsinger makes is that rank and file action wins, but leadership matters too. Many of the most important leaders in the 1930s were radicals, socialists, communists, trotskyists and anarchists. Without these, individuals who had some sort of understanding of capitalism, the role of Roosevelt and the union bureaucracy and were able to win arguments with their fellow workers, many of the victories would have been defeats.

I don't have time to go into the role of the Communist Party here. But Newsinger's book is an excellent introduction to an organisation of militants that were some of the most principled fighters in US working class history, but were part of a flawed organisation that was tied hard to the line of Stalin. The shifts and turns of the Soviet Union in the 1930s undermined the confidence and ability to organise of some of the best militants. But this is not to negate the role of many individual CPers, who from their defence of black people against racism, to their opposition to lynchings were not afraid to be seen standing by the underdog. Sadly, the CP towards the end of the 1930s was determined, make even closer friends with the union leadership, rather than the rank and file. This even lead to them repudiating wild cat strikes and attacking militants.

Newsinger packs and enormous quantity into this book. The defeats and victories of ordinary workers in the 1930s, as well as the roles (positive and negative) of militants and revolutionaries remain enormously important. Despite seeming to be from a forgotten era, there isn't a trade unionist or socialist anywhere in the world that won't gain something from this important book. I urge you to buy it, read it and pass it round your work mates. It'll help build the confident, organised movement that we need.