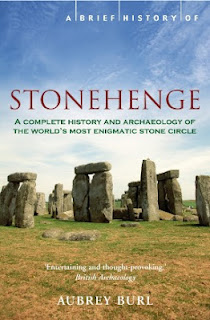 Aubrey Burl is one of the world's experts on stone circles, and that he has a encyclopedic knowledge of the sites, locations, history and documents of these ancient monuments is clear throughout this book. While aimed at the layman, or the person interested in Britain's most recognisable monument, the book is teeming with detail that will allow the reader to develop their interests further, and probably forms a useful starting point for the professional wanting to get to grips with the subject. This should make for a very interesting book, but unfortunately it turns out that Stonehenge is actually rather difficult to read and in places could put the less enthused reader off. But lets start with some of the history covered by Burl's work.

Stone circles are a very important part of ancient history. Our ancestors built rather a lot of these circles, around 1300 Burl says. They stretch from the enormous Stonehenge to smaller circles the length and breadth of the British Isles. These cannot be separated, either in time, or in design from sites in Northern France and Burl draws out the links, arguing convincingly that there was a clear interchange of ideas and experiences amongst the peoples of the time. As an aside, I was also particularly interested read about the miniature "rectangles and triangles" that pop up in the south-west of England, on a rather different scale to the massive central stones of Salisbury plain; Burl tells us that triangles of stones on Exmoor (he names at least four sites) have "midget stones camouflaged like winter-white stoats peeping from long grass".

One of the central themes of Burl's book is the longevity of Stonehenge. By this I mean not just that it has stood (and gradually fallen into disrepair) for thousands of years, but that the history of the site is many hundreds of years old. Burl shows how the site became first sacred in Mesolithic times, with four wooden pillars (sited where today's visitor's car park is) this, over many generations seems to have attracted generations of builders who erected a variety of cursuses, barrows, banked ditches and stone circles of various types. Burl is overly contemptuous of visitors who only gaze at the enormous stones and ignore the smaller markings that record the location of these far older, and perhaps more significant bits of Stonehenges' history. On my last visit to Stonehenge I was impressed though to find that the visitors guides did point out many of these features, and I fear the author is a little more churlish than he should be.

Burl examines many of the "theories" and "myths" of Stonehenge. He looks at the arguments about whether it was an observatory to predict eclipses (and debunks them well in my opinion) he argues that the circle (and others around the country) would have lined up stones with important events, like the midsummer sun, but were based on careful measurement, rather than an attempt to predict the future. He also argues, again very convincingly, that the Sarsen stones must have arrived at Salisbury plain by glacial action, rather than the long distance work that would have been required to get the stones there from the mountains of Wales. Here he is at his most polemic, arguing that it would have been illogical to take the stones such great distances without first reducing them to appropriate sizes. Whether we can see into the ancient person's mind as accurately as this, and knowing that religious activity is often not rational, I am less convinced by this aspect of Burl's argument as by him pointing out precisely how difficult and dangerous the journey would be.

But there are problems with this book. It feels disjointed and a little repetitive in places. While Burl has used described the story of Stonehenge in chronological order (though he does begin with attempts to understand it from early on) the story skips back and forth a little, and I found it difficult to understand at times which bits of the site were being described. Burl's writing is a strange mix of scientific argument and literary quotations. At times he includes long lists of archaeological writings. For example, on page 284, Burl writes; "Many Stonehenge students favoured a standing Altar stone - Charleton (1663), pp32, 52, and much later Hawkins (1966), p56; Atkinson (1979), p57; Richards (1991), p61...." he continues to list a further nine page references. This is just academic posturing and while no-doubt interesting to the expert, will only put off the casual reader. It would have been better put in a foot note (perhaps Burl needs a different editor) and given that on the same page, there is a further list of those who supported a "supine" Altar student, it doesn't leave me really wanting to recommend a book that has many interesting parts to it.

Finally, a note on language. Burl favours a flowery prose but at times it is inaccessible; "the feasting had been prolonged and epicurean". Why not say "they feasted extensively on their best food"? No wonder people think that historical experts can be lofty, or live in ivory towers unable to talk to the masses.

If you are a serious student of archaeology and stone circles, Aubrey Burl's book is probably a must read. If you want a introduction to the subject that doesn't talk down to the reader and makes it easier to understand the monument in its landscape I would start with Francis Pryor's book Britain BC.