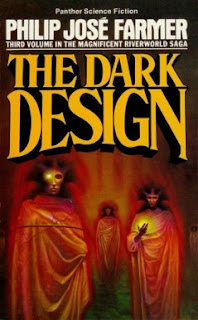 Volume three of Philip José Farmer's Riverworld series is one of those novels were you wonder if the series is about to "jump the shark". The two earlier ones, set as they are, on a baffling and fantastic planet were the vast majority of humans from all epochs of history have been resurrected, are excellent reads.

Farmer's orginal idea though, was so vast in scope that there was no way that it could be limited to one or two books. Indeed, in the preface to this novel he explains that the story continued to grow. What was meant to be the final volume became the penultimate.

Farmer is trying to tie up lose ends here. His various characters, or groups of characters are all famous individuals from Earth's history. Unlikely groupings of people like Mark Twain and Cyrano de Bergarac, Jack London and Richard Burton are some of the figures that are trying to find their way to an enormous tower at the centre of an arctic sea. As suggested by its name, Riverworld is dominated by a single river that stretches from pole to pole and back around the other side of the globe. This continuously flowing stream is surrounded by millions of humans. Despite these numbers, chance encounters seem common enough. Certainly enough that Farmer can experiment with the lives (both actual and fictional) of his characters.

Despite some good ideas here the plot occasionally feels of artifical. In one area of the planet the stone age society (there are limited metals and minerals on Riverworld) is running short of the flint it needs for tools and weapons and society is moving backwards. Yet elsewhere, one of the planet's founders has been able to divert an asteroid to provide a huge variety of material for technological development. So some explorers, travelling now by assorted balloons, steam boats and blimps have helicopters and lasers, which seems to me to undermine the point of the story somewhat. Elsewhere the novel seems to have been limited by its editorship. Do we really need to have every measurement in both imperial and metric values? The following sentence, for instance, should win a prize;

"In this deep, cold cup the water surrendered warmth, so much that the temperature at 1524 metres or 5000 feet was 2 degrees above Centigrade."


On the same page, on character orders de Bergarac, the pilot of his airship to 'Take her down to 1530 metres, Cyrano'. The exactness of the figures seems unnecessary.


The quest to get to the tower dominates the lives of the characters, the sole point of the world that the author has created is to beg the question why has this happened and why have human's been resurrected upon it. The quests to the tower, initiated by a rogue member of the intelligent beings that created the planet are part of finding the answers. Yet the story keeps running away from the author. It is non-linear too, Farmer weaving plot-lines around each other in a confusing mix. Farmer created a wonderful fantasy world here. I just hope that the final parts of the story answer the questions posed early on and don't confuse things more.

Farmer - To Your Scattered Bodies Go
Farmer - The Fabulous Riverboat
Posted by Resolute Reader at 6:54 pm