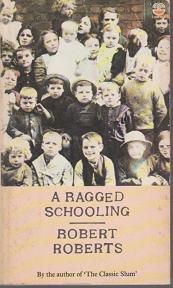 Robert Roberts wrote one of the all time great studies of working class life, The Classic Slum, but this short book is a truly wonderful account of his boyhood growing up in the slums of Salford in the early years of the 20th Century.
Salford then was a city dominated by industry. Roberts' father works in a light engineering factory, where it turns out he is a leading trade unionist. He also drinks to deal with the pain and poverty of working class life. Very early on in his life he persuades his wife that they should purchase and run a small grocery shop.


Roberts' life is difficult. There are moments of real pain and suffering. Schooling was minimal and even then what they had was driven by his mother's desire for them to become educated - this passion makes her the real hero of the tale. She is the one that dresses their wounds and helps them with the problems of everyday childhood. But she slaves and works to make this possible.
One of the interesting points raised, is that the shop enables Robert's family to have a better life than most of those on the estates around them. But it still requires backbreaking work. One Christmas day, Robert's mother lies in till 10am. Because it is the only whole day a year that the shop is closed. She then gets up and makes a Christmas dinner for eight.
As the children grow older, the tensions between his parents grow - on Robert's journey to the world of adulthood and work, he tells us of the theatres and the music, the children's games, their explorations (I'd love to know more about the history of Salford's "poisoned wood" that they try and find), sexual awakenings. There are stories of strikes and protests against the Duke of Wellington, the burning out of a Jewish shopkeeper by a local man, the dreams of Roberts' father who buys a second rate piano for his children.
These fascinating tales make for fine reading. But Robert's lyrical writing is also beautiful. The poignant suicide of a woman who can't take one more day in the mill is particularly moving, but the description of the river Irwell then will stick with me, every time I cross the local bridges, there

"tumbled a river on whose purling waters the very rainbows appeared, at times to melt, though basically it ran the colour of plain chocolate. But catch the stream in happy mood and under one's eyes brown would dissolve into Mediterranean blue, azure slide into rich crimson.... standing entranced upon a bridge, we threw quantities of rubbish over to mix the creeping palettes".

Stories that bricks would float near Victoria station are dismissed by the author as "libel", but the output of the dye factories around the river meant that Roberts thought it would be 2040 before salmon swam the Irwell again.

This is a lovely little book for anyone who wants to understand working class life in Salford 100 years ago. There are still those around who will recognise from their parents the place names and descriptions, but it is a vanishing world, and every time they erect another block of identity kit yuppie flats that will remain empty for years, they wipe away an important bit of history that should not be forgotten - the struggle of ordinary people simply to live in dignity in the face of the ever hungry capitalist system.
Posted by Resolute Reader at 10:57 pm

Nice to see this enthralling work get a thumbs-up as it is usually lost in the slipstream of the 'Classic Slum'. I read both books when I went to live in Salford in 2005 and later, as a civil servant in Salford County Court, would walk down Liverpool Street if I was intending a night out in Manchester city centre; Roberts' area of Waterloo then having been totally flattened, and not re-built on, unlike the rest of Salford. A few new flats have gone up by Oldfield Road, their eyes and catchment areas clearly set on Manchester rather than the Adelphi or Ordsall areas of Salford next door. I was also lucky enough at that time to do some voluntary work for the Working Class Movement Library near to what would have been Zinc Street; I was too late to meet Eddie Frow, but co-founder Ruth Frow (now gone, alas, to the great Reading Room in the sky) would give me lifts home to Pendleton and thereby provide me with a tenuous link to such affairs as the Battle of Bexley Square. Roberts' book stands all the more eloquent these days in the face of all the 'my-early-life-in-working-class-hell' testimonies that seem to flood the book shops these days; this is how to do it, boys and girls!

Thanks for the comment Steve. Do you know more about the "poisoned wood" mentioned in the book - that'd be fascinating for me to know.

The Battle of Bexley square still lives on in popular memory - there are individuals who drink in my local pub, whose parents were at the protest. Again something to delve deeper into.

Hi, thanks for the come back. I can't enlighten you as to any part of the poisoned wood, but I note that the book that Roberts says it comes from, by A. Stansfield, is an ebook; it's on http://www.kobobooks.com/ebook/Essays-sketches-being-few-selections/book-xhrHP1oNgkqlllQ9zqNgIA/page1.html
So you can always trawl through there! I do miss my days at the WCML, it was a bottomless pit of fascination for me, and I managed to give it a mention when I wrote my all-too-brief area guide to Salford for the online property magazine Findaproperty - I'm always up for spreading the word!