Raymond Chandler - Trouble is my Business 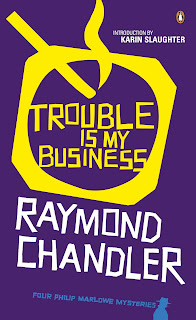 This collection of stories by Raymond Chandler will be familiar to anyone who has read any of his other works. They all begin from a similar theme - the lonesome, hard drinking, cynical detective confronts a conspiracy or mystery that usually involves a beautiful woman. First published as a book in 1946 the stories were themselves published in magazines between 1933 and 1939 and carry a flavour of their times. Prohibition is over, but gangsters, millionaires and confidence tricksters rule the roost in an underground that frequently erupts into violent crime. Mostly ordinary working people are bystanders - like the hotel staff that the hero of Guns at Cyrano's slips cash too because they wages don't stop their hunger (though perhaps he's the gullible victim here?).

Cyrano's is a slightly unusual story for Chandler, as it initially focuses on a boxing match were one fighter has been asked to take a dive. The mob feature heavily, but it soon becomes clear that the real criminals are one step removed and no-one is actually telling the truth.

The title story Trouble is my Business is the most Marlowe of  the novels though the detective doesn't share the name (which doesn't stop publishers marketing the book as being a collection of Marlowe stories). Here is a convoluted plot that involves a wealthy heiress, a no good lover with gambling debts and a really annoying butler that carries the reader along rather than tells a story. Chandler once said about his style:


The denouement would justify everything. The technical basis of the Black Mask type of story on the other hand was that the scene outranked the plot, in the sense that a good plot was one which made good scenes. The ideal mystery was one you would read if the end was missing. We who tried to write it had the same point of view as the film makers.


This is very true of these stories here. Like those science fiction stories that are read just for the twist ending, the resolution of the story is key here. Though the resolution is not always the ending, that is usually the bit where Marlowe (or whoever) bemoans the fact that the beautiful heroine has left/been murdered/or rejected him.

Chandler was very aware that he followed a formula when writing. One of the problems reading several of his stories or novels in succession is that you notice they all have very similar scenes. There's almost always a point when a couple of policeman play good cop/bad cop with the detective and threaten him because it looks like he killed someone. There's also always a bit when Marlowe (insert other name here) discovers a body then leaves after cleaning all traces of him. Then his apparent pre-knowledge of a killing allows him one over others in the story.

These sound like negative points, but Chandler was writing to sell stories, and his style worked. Nonetheless he isn't just a hack writer, he has a knack of painting pictures with a couple of sentences, and creating scenes with barely a paragraph. None of us has ever seen Benny Cyrano, but when Chandler tells us that he was "shaped like two eggs, a little one that was his head on top of a big one that was his body" we can all picture him instantly. The opening paragraph to Red Wind is classic Chandler:


There was a desert wind blowing that night. It was one of those hot dry Santa Anas that come down through the mountain passes and curl your hair and make your nerves jump and your skin itch. On nights like that every booze party ends in a fight. Meek little wives feel the edge of the carving knife and study their husbands' necks. Anything can happen. You can even get a full glass of beer at a cocktail lounge.

Its a paragraph that drags you in to the whole story. The ending to Goldfish was for me, marked not by the actual location of the missing pearls, but the realisation that the wife of the main criminal almost pulls the wool over the eyes of the detective who is trying to recover them for the insurance agency. That he is doing so for reward money to split with a policeman who has been kicked out of the force for marrying a known criminal who is now in prison makes it all the more brilliant.

If you've not read Chandler this is a good place to start, though its also true that Chandler's short stories never quite get it as much as the full length novels. Nonetheless they're fun and classics of a genre that stand out from among tens of thousands of similar tales.