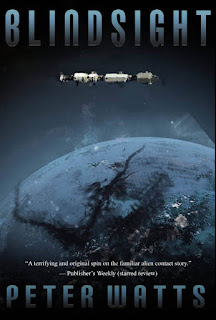 I'll admit to making a mistake with Blindsight. I bought it thinking it would be a 'hard' science fiction of first contact with a mysterious alien ship along the lines of Arthur C Clarke's Rendezvous with Ramaa book that amazed and inspired me many years ago. Blindsight is actually that, but it is much more - it is a novel that probes human psychology as much as speculating about alien culture. Unfortunately for those reading for a SF narrative this rather obscures the story. This isn't necessarily a problem, but it might not be what was expected.

The novel begins with a shower of shooting stars, thousands of objects fall and burn across Earth's skies in a clearly artificial way. Subsequent analysis shows these objects were making some form of survey and Earth's population prepares for some sort of alien contact. Years pass, and nothing happens until a strange object is found in the Kuiper belt. The ship Theseus is sent to study this object which turns out to be a massive and very alien craft called Rorschach. Theseus is crewed by a highly trained and very specialised crew. In this future Earth many social problems have been solved (women are now on an equal footing socially and economically with men) and humans are habitually engineered. Our rather unreliable observer Siri (who is supposed to be super reliable) has, for instance, only half a brain. The other half was removed to cure childhood epilepsy and this apparently makes him a near perfect observer. Another crew member has four human personalities in their brain (nicknamed Gang of Four) and yet another is a long extinct species of vampire. Siri has a detailed backstory that explains his personality, but also gives much context about the future world.

All of this allows the author Peter Watts to wax lyrical on the nature of humanity, intelligence and the reality of evolution. This is particularly important when discussing first contact because Rorschach turns out to be really really alien. It defies analysis and understanding. It is deadly to Earth's explorers yet does not act particularly threatening.

As a novel the book is relatively successful, though at times I found the structure difficult (though this turns out to be deliberate) and the musings on life, the universe and everything feel contrived at times. Some of the references seem likely to date quickly (who really uses the word sneaker-net these days) and character nicknames seem contrived in places.

But that said, the story does carry the reader along. If the suspenseful first exploration of the alien craft had some of the atmosphere of the first Alien film then the finale felt a lot like the sequel Aliens. The story is framed within an interesting future history which makes much on how society might change and how humans might allow themselves to develop.

If I'd bought this as a separate novel I might not have rushed to get the sequel. But my edition of Blindsight comes bound together with it's sequel Echopraxia and I'll likely read that soon. It's not what I expected and probably not to everyone's taste, but Blindsight has some great ideas.

Posted by Resolute Reader at 9:26 pm