Rachel Carson - Under the Sea Wind 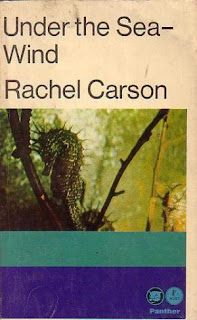 Rachel Carson's Silent Spring is probably the most famous ecological work every published. Its clarity and its clarion call for action, as well as the way it located environmental crisis in a system that prioritised "the right to make a dollar" helped kick-start the modern environmental movement. Yet Carson was also a author of a whole number of works that looked at the ecological systems she was most familiar with, in particular a trilogy of books about the sea. Carson had worked as a scientist for the US fisheries bureau before becoming a full time writer and her knowledge of the sea and its ecology shines through in this book from the trilogy.

Under the Sea-Wind is a lovely piece of writing. Carson takes a number of key animals who live on, in or above the sea and describes their lives. Looking at individuals she uses a novel style narrative often naming the animal after its scientific name, but this is no work of fiction. Her descriptions of the lives of birds, fish and other animals like crabs are beautiful and often tragic, but this is no Watership Down. Her animals don't speak or have human characteristics; they shape and are shaped by the ecology they inhabit.

That said, some of the stories here are truly epic. We encounter the mackerel first as a tiny living thing, no more than a few living cells clumped together. As it grows it's life radically changes, initially eating other small sea creatures before it can feed on larger prey. Carson describes the luck that keeps our individual fish out of the belly of other predators, and we see how the huge shoals protect the individuals from death. But we also see the cyclical nature of life. The death of animals is usually the life of others.

This is no less true of humans and one of the good things about Under the Sea Wing is that Carson does not pretend the sea's creatures live isolated from human contact. In fact, humans, particularly fishermen are as much part of the world that these animals inhabit. Whether its the harbours that provide hiding places for young mackerel and some of their predators, or the fishermen whose nets threaten large numbers of the fish.


The fisherman who lived on the island had gone out about nightfall to set the gill nets that he owned with another fisherman from the town. They had anchored a large net almost at right angles to the west shore of the river... All the local fishermen knew from their fathers, who had it from their fathers, that shad coming from the channel of the sound usually struck in towards the west bank for the river when they entered the shallow estuary, where no channel was kept open. For this reason the west bank was crowded with fixed sighing gear, like pound nets, and the fishermen who operated movable gear competed bitterly for the few remaining places to set their nets.

Here we see the impact of human interaction with the sea, the potential for over-fishing and the consequent destruction of the ecology. But here is also the importance of the sea to human communities.

Over and again I was struck by how Carson emphasises the continuity of life in the sea. There's a beautiful chapter early in the book where a bird is hunting crabs and other seashore life. In turn the crabs are eating fleas, but one is scared by a fisherman walking on the beach. Fleeing into the surf the crab is eaten by a sea bass, which is then eaten by a shark. Some of the bass' body floats back to the beach where the meat is eaten by beach fleas.

When environmental NGOs campaign to save the tiger or the panda we can forget that these creatures are part of a wider network of interactions. These interactions are never one way, but rather cause numerous onward effects. The crab feeds off the fleas, and sometimes is eaten by a fish. But the fish in turn can be food for other animals or the fisherman casting their nets. Carson gives us the Sea as it really is - a network of interacting animals and plants, whose ecology can be distorted and broken by outside forces. It's a beautiful piece of writing that has much to teach us about how we think about the environment today.