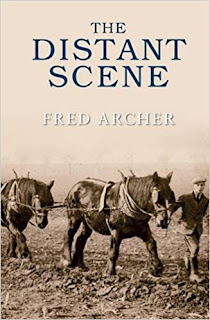 Fred Archer was a celebrated author and farmer who documented the lives of the people of the small village of Ashton in the Vale of Evesham. This, his first book, sparked a large number of others until his death in 1999. Born in 1916 the backdrop to Archers' life was the enormous changes that overtook the English countryside between the wars and in particular after World War Two. His books are somewhat whimsical - they deal mostly with the personalities of the village and how Archer remembers them. As such its easy to read the books as accounts of old-fashioned sayings, humour and advice; or to focus on Archers' complaints about the decline of rural skills, the replacement of horses by engines, and the wider social changes in the village.

The danger is, of course, that the reader ends up romanticising of the countryside and the lives of those that live there. 20th century rural life was much better for the working population of the countryside. But it was still a life dominated by low pay and poverty. Reading between the lines of Archers' book you get a sense of a strict hierarchical life, and on occasion you get hints of the poverty behind the characters. Archer himself was a hardworking man who turned his hand to all of the agricultural labour there was. Readers looking for descriptions of how haymaking proceeded or the art of ploughing with horses, will find plenty of that here.

There are the occasional hints of wider subjects. For instance, Archer recalls (probably in the late 1920s) older labourers reminiscing about the arrival of Joseph Arch to speak to them, from the back of a waggon, about the need for a trade union - this would likely have been between 1872 to 1875. These moments left a lasting impression on communities dominated by poverty and long hours of work.

I was also struck by the chapter detailing the workers who came from Birmingham and other towns and cities to pick peas every year. These weren't itinerant labourers, though those did exist, but workers from the industrial towns whose "holiday" in the sun was a weak picking peas and drinking in the local pub.

Archer himself was from a better off family, his dad working closely with Mr. Carter, the big farmer. In fact Archer refers on occasion to going away on holiday, which must have been remarkably unusual for the majority. A Distant Scene then is worth reading, not just for its humour and carefully written descriptions. But also because it portrays a wider agricultural community in transition.

Thompson - Lark Rise to Candleford
Kerr Cameron - The Ballad and the Plough
Whitlock - Peasant's Heritage
Bell - Men and the Fields
Posted by Resolute Reader at 11:25 am