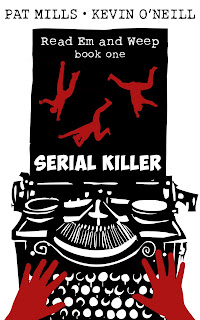 Its been quite a long time since I've read a novel quite this weird. And I mean weird in a good way. Crime fiction about serial killers can easily fall into cliche, instead Pat Mills and Kevin O'Neill's new novel Serial Killer creates a whole new set of cliches to be emulated by authors for years to come.

Both authors have been at the heart of some of the most adventurous, challenging and fascinating graphic and comic writing of the British post-war period. Mills is well described as the "Godfather of British Comics" on the back of this book. O'Neill has played a similar central role in the graphics novel industry. So their first collaborative novel ought to be something special and it's certainly different.

Given the background of the authors readers will not be surprised to find that the slightly alternative reality Britain that it is set in focuses on Dave Maudling, a comic book writer of some skill, whose work for a series of unsavoury publishing houses has given him a jaundiced view of the world. The off the wall titles he and his colleagues work on, such as the Caning Commando, The Spanker and Feral Meryl are all glorious spoofs of the sort of comic that abounded in the late 1970s. Mill himself was responsible for one of the greatest war comics of all time, Charley's War, but the spoofs here are of those second rate comics that saw every German as a Nazi and each Japanese soldier as a yellow-eyed maniac who'd run at the first sign of some British steel.

Maudling's mother is murdered during his childhood. She then visits Dave in the 1970s and enlists his help in finding her killer. At the same time, Dave is also trying to become a killer himself. He enacts revenge on the world that has left him embittered and alone by trying to encourage children to kill each other by inserting dangerous ideas into the most popular comics. One of the clever things about this book is it shows how the casual violence, sexism, racism and homophobia of the post-war period helped shape a generation of men whose lives were causally violent, sexist, racist and homophobic.

Dave's sexual obsession with fur, his bizarre home life and his inability to function properly around other people is the backdrop to what seems to be at least a temporary descent into madness. That said, everyone in the 1970s seems mad from this distance and the larger than life lunatics that inhabit Mill's and O'Neill's world only serve to highlight how far we have come, and how much further we have to go.

One particular aspect to this is the way that the authors highlight precisely how bad workplace sexism and homophobia was before social movements helped make it quite so unacceptable. In fact those that cry today about political correctness might do well to reflect on precisely why it was the women's  and gay liberation movements became so radical. Sadly Maudling has a lot to learn in this regard.

It is difficult to review this book without giving away too much of the novel. If you love the comic genre, like a lot of knowing references to the 1960s and 1970s (not just to comics either), hated those terrible comics they made girls read about boarding schools and aren't phased by novels that mingle the living dead with sexually ambiguous characters, then this is definitely for you. At times it's laugh out loud funny, at others its quite perplexing. You'll either like it a lot, or never get past chapter two.