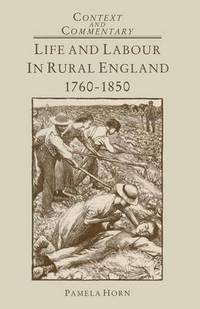 Reading Pamela Horn's history is always a joy. Her writing is simultaneously entertaining as well as having the ability to draw out the historical trends. This short book covers some of the same ground as her longer book The Rural World but focuses on using examples from contemporary commentary and literature to explore how people in the period covered understood the changes taking place. But Horn never once sentimentalises the life of the people in rural England. This was a time of poverty, of (especially in the aftermath of the Napoleonic wars) economic crisis for the agricultural areas and there was a vast difference between the experience of those with money and those without. Horn points out, when discussing a Wordsworth's poem The Prelude (1805) that Wordsworth's


vision of pastoral serenity conveniently ignored the harsher realities of day-to-day life on the land. It gave no indication of the long hours of drudging labour expected from most peasant cultivators or the feudal dues exacted from them by many landowners in Wordsworth's native Cumbria... This is rather a 'countryside of the mind' - a place of intellectual refuge - than one rooted in the reality of Georgian England.

She continues by quoting W.J.Keith who highlighted that "it is no coincidence that the romantic cult of wild nature flourished just at the time when the Industrial Revolution was gaining momentum; the countryside is cherished only when it is seriously threatened - and it is cherished most by those who threaten it."

What the reality was for the people of rural England is ably drawn out by Horn's writing as well as the many writers she quotes. Some of these are well known, Horn draws on William Cobbett's extensive writings about the people and places of England, as well as quotes from Charlotte Bronte and others to illustrate the class contradictions. But I was struck by the power of the quotes from ordinary people. Here's a section from a long quote by Joseph Mayett, a Buckinghamshire labourer who was demobilised from the army in 1815 at the age of 32.


I gave up gathering rags and took to work for which I received 7 shillings per week to maintain me and my wife and bread was 3 shillings per loaf.. I was much distressed by the summer coming on I was soon relieved by an advance of wages but the harvest proved very wet so that I met with a disappoint[ment] by the great loss of time I sustained but after harvest I met with a place of work at the Esquire at 10 shillings per week and the price of bread was sunk to 2 shillings per loaf and by these means things of a temporal nature began to take a favourable turn... [but] in the month of January 1818 the esquire being gone out for a long time the baily took it upon himself to reduce the wages of me and several more of the men [who] had no children for he said a man without a family could live better upon 9 shilling per week than those that [had] Children could on 10 shilling but he required us to do as much work as they so in the month of March we all left.

Here we see the lot of the labourer... bounced between employers who could change salaries on a whim, food prices that rose and fell dramatically and short term working opportunities, for low pay. It is no surprise that men life Mayett would riot, protest and destroy farm equipment in order to try and defend their jobs and wages.

Horn does look at these protests (and there were significant ones such as the Captain Swing riots during the period covered). But her major focus is to try and get across the immense change that took place in the countryside in this period.


As a result of enclosure and, in particular, of the post-[Napoleonic]war agricultural depression the number of small owner-occupiers had dwindled, and the tripartite system of land cultivation, comprising landlord, tenant-farmer and agricultural labourorer had become ever more firmly entrenched.

As a French traveller noted in the early 1860s:


the commons have been continuously reduced; thus the peasant can no longer have recourse to his own small supplies of meat, and having sold his strip of land is left with nothing but his two arms, which he now hires out.

Thus, while Horn doesn't use the word particularly, this period sees the entrenchment of agricultural capitalism, and coming to dominance of urban industry in the British economy. The world had been transformed, and the rural population, rich and poor, but particularly the poor had been changed too. Horn's book is an excellent over-view of these changes, from the role of clergy to the laws on poaching, and the changes that hit the landowners. But her focus on those who worked the land is really key and is what makes this a lovely introduction to the subject and period.

Horn - The Rural World 1780-1850
Thompson - The Making of the English Working Class
Hill - Liberty Against the Law
Posted by Resolute Reader at 12:42 pm