Gerrard Winstanley - The Law of Freedom and Other Writings 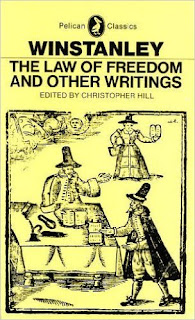 I've been writing a couple of pieces around the Diggers and the English Revolution recently and have taken the opportunity to delve deeply into the writings of one of the most remarkable radical thinkers that have ever been produced. Gerrard Winstanley is famous for being the leader of the Diggers who camped at St. George's Hill from April 1649 and later moved to Cobham in Surrey. They were followed by a number of other camps as the English Revolution developed following the execution of Charles I. The particular conditions of the time - a desire for fundamental change, a frustration at the lack of action after Charles' death and a land and food shortage meant that Digging was not as surprising a reaction as might be expected. The camps didn't last - mostly as a result of repression - but they did serve as a minor experiment in revolutionary new ways of living.

This collection of essays comes with an excellent introduction to the life and ideas of Gerrard Winstanley by the radical historian Christopher Hill. Since many of Winstanley's writings are available online, it would be worth searching out the book just for Hill's introduction. That said, however, the real pleasure in this volume is the remarkable writings of Winstanley himself.

This is for two reasons. Firstly Winstanley writes beautifully. Much of his polemic is deeply immersed in biblical allusion and analysis. For those of us not well-versed in the Bible, this is a challenge, but as Hill himself points out, Winstanley can actually be read like you would read poetry. But even a passing understanding of the bible allows the reader to get a sense of Winstanley viewing his world, and his history through a radical religious reading that is fundamentally challenging the status quo.

The biggest gem in this collection, and perhaps Winstanley's most fascinating work is the title piece, The Law of Freedom, in which a disappointed Winstanley, who has seen the end of his efforts to built a new world through exemplary farming of waste land, appeals to Cromwell to bring about the Commonwealth. Winstanley systematically describes the workings of his utopia, from the shared storehouses that take the surplus of production to distribute to everyone who needs it, to the postal system that will ensure the news of the realm is distributed everywhere and, perhaps most importantly, to the system of annual elections that ensure corruption of officials cannot take place. It's a fascinating vision of Utopia, which has some similarities to actually revolutionary changes, in others, such as its focus on the family unit of production and its absolute patriarchy, it is clearly born of the limitations of 17th century radical politics. That said, these writings are a fascinating read, and this collection is well worth hunting out. I'll link my forthcoming piece on Winstanley here on publication.

Berens - The Digger Movement in the Days of the Commonwealth
Hill - The World Turned Upside Down
Hill - Liberty Against the Law
Gurney - Gerrard Winstanley
Manning - Aristocrats, Plebians and Revolution in England
Posted by Resolute Reader at 9:53 pm