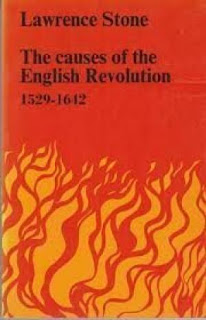 The question of "why" something happened in history is a vexing one. It's rarely easy to determine simple causal reasons behind events, and for something as complex as the English Revolution of the 17th century, to try and do so would be a pointless task. That said, some have tried and often this has meant confusing specific aspects of those years with the whole event itself. Lawrence Stone himself points out that such "great" historians as C.V. Wedgwood have focused on the reasons for the outbreak of war between Parliament and King, missing the context of the war itself. As Stone points out:


To concentrate upon Clarendon's 'Great Rebellion' or Miss Wedgwood's 'Civil War' is to miss the essential problem. The outbreak of war itself is relatively easy to explain; what is hard is to puzzle out why most of the established institutions of State and Church - Crown, Court, central administration, army and episcopacy - collapsed so ignominiously two years before.

Stone thus sets himself a difficult task. To unpick the complex and intertwined events and changes that ultimately led to Charles' be executed and a Republic being declared. The first chapter of this book then is a sociological study of what a revolution is. Stone manages to make this an abstract discussion that is only of academic interest. It's worth noting that Norah Carlin in her similarly titled The Causes of the English Civil War  points out that


One problem with all such theories... is that they depend on relatively simple generalisations... Few 17th century specialists would now accept [as Stone does]... that the people who led the English revolution could be described, along with eighteenth-century Jacobins and twentieth-century Maoists, as 'fanatics, extremists, zealots... prepared to smash through the normal constraints of habit, custom and convention'.

Stone is on firmer and more interesting ground when he looks at the social changes and economic developments that led to the Revolution. He puts a great deal of emphasis on the numerical growth of the gentry and their consequent increased influence, as well as the decline of the aristocracy. This was crucially of importance in the Houses of Parliament, which grew from 300-500 MPs, as the gentry component increased from 50 to 75 percent over the period.

While emphasising these changing economic circumstances, Stone doesn't ignore other factors, such as the associated growth of education and literacy which meant that taught "the electorate of yeomen, freeholders and shop-keepers" to read. Though, in a reversion to sociology, he suggests that this was important because a "rapid increase in the proportion of the population receiving primary education" is one of the factors likely to lead to revolution. A thoroughly mechanical understanding of revolution in my opinion. That said, Stone is right to link this to the way that the Puritans and more radical movements during the course of the Revolution helped develop and sustain their movements through the production of pamphlets. This is, he argues, a necessary "cause for the peculiar and ultimately radical course the revolution took".

Ultimately what causes the Revolution for Stone is that "new social forces were emerging, new political relationships were forming and new intellectual currents were flowing, but neither the secular government nor the Church was demonstrating an ability to adapt to new circumstances." The words he uses to describe English society in the 1620s is "disequilibrium" and "dysfunction". Wider changes were undermining the basis for the old order and encouraging the development of new forces that could surmount it. There is a sense in Stone's book of society no longer working. Perhaps it's better to see it as a world were things can no longer continue in the old ways, and change has to come, or the old order will reassert itself. As the Civil War developed, those forces who desired change became stronger and more confident and the king's resistance forced their hand. The world was fundamentally changed.

Yerby - English Revolution and the Roots of Environmental Change
Posted by Resolute Reader at 9:43 pm