George Yerby - The English Revolution and the Roots of Environmental Change 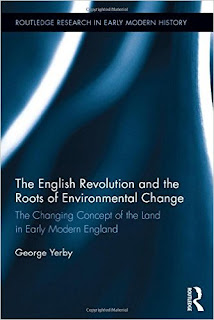 This is an interesting and important attempt to grapple with the great transformation that took place in England, the transition from feudalism to capitalism, and what that meant for how individuals and society saw the land, and the wider environment. Subtitled, "The Changing Concept of the Land in Early Modern England", Yerby begins by arguing that in medieval times the very word land meant something different:


A 'land' identified the smallest discrete area of cultivation win the great common fields that surrounded each village, and it was the unit by which the equal allocation of strips in the open field was measured. It reflected the shared and direct occupation of the physical land... In every respect, the medieval 'land' represented an unmediated and inseparable physical connection between the village farmer and the earth. [2]

Yerby contrasts this with today. He writes that our approach has become "imperialistic" and


our society of mini-property owners relates less to the real land and more closely to a different, collective usage of the word... This takes the form of a national territory, set apart from other such lands and defined essentially by the exercise of a particular form of law and government. [3]

Exactly how and why this transformation took place is the subject of Yerby's book, and in doing so he tries to get to grips with an important concept, the transformation of society's relationship with nature, or as Yerby puts it "We are no longer part of what we are part".

The transition begins with the gradual changing in the way that land is used and organised. In particular this can be seen in the shift away from open fields of medieval times to the enclosed fields. By the second half of the sixteenth century, Yerby points out, that these changes had become " a visible departure from what had gone before and even a reversal of the traditional medieval relationship with the land." [17]

Alongside these changes come changes to the "mindset" of those who work the land and own it. The land is viewed differently, in Marxists terms, the products of labour on the land become coveted for their exchange-value, not their use-value. The land itself, or pieces of land, become commodities. No longer part of the communally owned land of the village they are now to be bought and sold with little consideration of their wider relationships.

This had its ideological repercussions in the Reformation. Here we must be careful. The Reformation was not a product of these changes, though changes in the land helped the Reformation progress in places. But as Yerby argues, the break from Rome "was the basis for a clearer definition of the concept of a 'land'.... In the process, the scope for a discrete national entity occupying its own public space was created". [44] What these changes meant for the poor and the rich is well documented in Yerby's book. His examination of the material paints a picture of a major land-grab that benefited the rich greatly, and impoverished those who had formally worked the open-fields, leading to hunger and depopulation. As Yerby points out, open and enclosed fields had similar yields, but contemporaries (or at least those interested in enclosing land) believed that doing so increased productivity and value.

But one disappointment that I have is that Yerby underplays the resistance that took place to enclosure. For instance, he refers to the ""vigorous reaction of both government and people against enclosure and engrossing in the late 1540s" [75] without noting as historians such as Andy Wood who have pointed out that the late 1540s saw rebellion the length and breadth of England. Today this is mostly remembered because of Kett's rebellion in Norfolk, but simultaneous risings across the country involving tens of thousands of rebels, must surly be classed as something more than "vigorous reaction". Indeed, its arguable, as Steven Bindoff has written in his classic account of Kett's rebellion that the revolts might well have "clipped the wings of rural capitalism".

Yerby spends much of the later part of the book discussing the development of a national vision of the land through the context of the way that this emerges from the struggle between Parliament and King. Economic development in the countryside was furthering the development of trade and industry. Alongside this was evolving a political nation, a coherent political structure capable of perceiving its unified interests. Yerby argues that at root the conflict in the 1640s between Parliament and King is between those who see their interests in furthering this process and those who resist the changes.

For this to take place requires a number of factors such as the enclosing of land and the growth and development of the gentry as a "national class". As the gentry grow in power and influence the role of Parliament changes, no longer an arena to rubber stamp the King's policies, it instead becomes a place to debate the "national interest". Yerby highlights the "radicalism" of the merchant class in this regard (firmly placing himself in opposition to Robert Brenner on this matter). Quoting Christopher Hill who pointed out the "optimism of the merchants and artisans, confident in their new found ability to control their environment, including the social and political environment". For Yerby this highlights the


self-confidence and assertiveness of the merchant... and establishes their relationship to other crucial developments of the time, as in conjunction with the gentry and the yeoman farmers, they broke away from the restraints of the medieval past in the pursuit of liberal freedoms. [167]

With the defeat of the old order and the victory of Parliament a new world is free to take off, one based on a "commercial landscape". But now wealth was not generated solely from land, but from industry too... the depopulation and enclosure of the countryside being an essential part of making industrial, urban capitalism possible. Yerby concludes that the great transition that began in the sixteenth and seventeenth centuries created a world where nature was turned into a commodity, creating a "exploitative relationship with the land and the resources of the earth".

He finishes by speculating that perhaps this transition was, after all, a mistake, and the older ways of organising society were perhaps more viable in the long term. While there was little choice in the transition that took place, I'm not so sure this is a useful question. Pre-capitalist society was hardly free of economic, social and environmental crisis, and had the transition to capitalism not taken place in Western Europe it almost certainly would have elsewhere. A sustainable and socially just future will not be found by looking backwards, but by fighting in the present. Yerby's book is an important contribution to understanding how we got here.

Dyer - Making a Living in the Middle Ages
Perry - Marxism and History
Dimmock - The Origin of Capitalism in England
Zmolek - Rethinking the Industrial Revolution
Posted by Resolute Reader at 8:08 pm