Josh Sutton - Food Worth Fighting For: From Food Riots to Food Banks 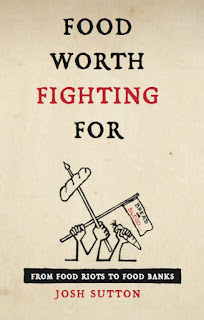 While food is often an incredibly personal choice, the choice of what to eat is rarely made in a vacuum. Today in Britain, over a million people rely on food banks, with an estimated 40,000 volunteers helping to make sure that they don't go hungry. As Josh Sutton points out in Food Worth Fighting For this shocking statistic cannot be separated from wider questions of poverty, unemployment and austerity. In seeking to understand the modern food system Sutton looks back to the beginnings of capitalism.

In order for capitalism in England to develop it needed to transform existing social and economic relations. In the countryside that meant the destruction of any communal aspect to agriculture, the forced depopulation of rural areas and the transformation of peasant labour into wage labour. The battles to defend the common land, to prevent enclosure and the maintain a way of life are, for Sutton, in part a battle over the right to good quality, appropriately priced food. Here Sutton draws heavily from EP Thompson's idea of a "moral economy". Thompson argued that through food riots the "crowd" fought to retain its traditional interests and in particular the right to set the price of food.

A variety of chapters illustrate this. For instance the 1816 Ely and Littleport 'Bread and Beer' riots when crowds of labourers fought for bread and beer. Beer was important, not because of drunken excess as the magistrates at the time argued, but because


until the nineteenth century, domestic brewing was a key part of life for the agricultural labourer, or more often than not, his wife. the poor quality of drinking water at the time was such that brewing beer at home was common practice... However, with the rapid increase in the number of enclosures... together with the economic conditions already described, home brewing fell into decline.

So, as Sutton rightly points out, protesters were merely demanding what traditionally had been theirs - cheap, healthy (at least healthier than water) beer.

There are plenty of other examples, from the Captain Swing "riots" to the Luddite movement, which linked rural work and wages with food. In a fascinating chapter, Sutton examines the Newlyn fish riots. Here again, fishermen fought to defend their right not to work on the Sabbath against other workers who wanted to land fish in order to benefit from the emerging industrial transport system to the capital. Sutton describes the movement well, and how it fits into the "moral economy".

Bringing it back to the modern day Sutton argues that:


The nature of the riot has changed, as have the prevailing economic circumstances in which it takes place. The goal, however, i.e. the desire of communities for a just, equitable and affordable distribution of food, remains firmly in place... In the 21st century, in Britain at least, the food riot is re-invented as a struggle, a 'food fight', and it is a fight that is far from settled.

Here however I found Sutton's ideas on less firm ground. I remain to be convinced of either the similarity in the struggles over food today in Britain with the past, nor their continuity. One of the key points of the battle for the "moral economy" was that it was an attempt to prevent capitalist relations being imposed upon the mass of the population. Tearing down fences from enclosed fields, or fixing the price of bread and meat in the market are conscious attempts to stop the market.

This is not the same as persuading Tesco or Sainsbury to give their excess food to a food bank to feed the hungry. As Elaine Graham-Leigh has pointed out in her Diet of Austerity supermarkets have waste built into their business model. Finding a cheap way of getting rid of that waste is good business sense. More problematic is that, as Sutton does recognise, this sort of action does nothing to undermine, block or role-back the appalling transformation that has been made to our food system, important though it is in ensuring people do not starve. These are struggles at best to reform, or more often deal with the failings, of capitalism.

I have to agree with Tristram Stuart, quoted in the book by Sutton who argues that


it would be contorted and possibly silly to compare the Gleaning Network to literally starving eighteenth century food rioters... Rioting has a special place in civilisation: when people are pushed to a point of urgency that society's rules are set aside.

To Josh Sutton's credit though he recognises the need to transform our food system and he also acknowledges that we may well see real food riots in the future as increased numbers of people are pushed below the breadline. In fact, its worth noting, that in the 2011 riots in the area of Manchester I lived in then, food and drink were looted and re-distributed. It wasn't just about trainers or hatred of the police.

So I am unconvinced by Josh's thesis of continuity of struggle in one sense. But I do agree with him that people have always tried to organise to stop hunger. This book illustrates that well, and will help every reader understand how we have got into this mess. In this regard the chapters on war-time rationing and the role of supermarkets and big business are excellent. Josh Sutton also offers us inspiration that we can change things for the better today.

Josh Sutton will be talking about his book at Bookmarks the Socialist Bookshop in central London on Tuesday 14 June, 2016. More information here. Expect food riots, music, beer and bread, they say.