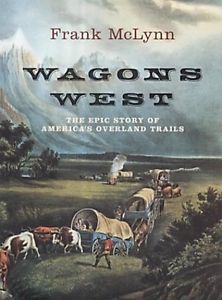 The story of the pioneers who travelled from the American mid-west to Oregon and California from 1840 onwards is one suitable for a grand re-telling. Its an epic tale of huge distances crossed with primitive equipment, bravery and unimaginable hard work, hunger, disease and violence. Frank McLynn tells the stories of the first difficult, disorganised and chaotic crossings and then, in broad sweeps tells those of the remaining years, highlighting a number of unusual crossings rather than repeating what effectively had become quite a routine trip.

Unfortunately, while the subject matter is epic, McLynn's telling of the story doesn't live up to it. In places it became very difficult to follow the author's accounts. Not helped by the numerous names and multiple different routes taken by the wagon trains.

McLynn also highlights the stories of some of the more unusual trips. For instance, the disastrous trip known by as the Donner Party, after one of the key families that took part. This group of pioneers took a short-cut, which was in reality, little more than a fantasy of one of those characters that the West seemed to breed - a self-styled explorer and mountain man, carried away by his own dreams. Delayed on route and hoping their short-cut would mean they could avoid the winter snow, the Donner party became trapped and ran out of food. A number resorted to cannibalism, and not a few were driven insane by the privations. But there were also heroes, like the men who agreed to try and take food too the victims.

As someone who knows little about this period of American history I was also fascinated by the story of the Mormon trek that established Salt Lake City as a refuge from persecution in the east. This was a highly organised affair, involving thousands of travellers, and McLynn gives real insights into the nature of the Mormon community in this period. The internal arguments, debates and politics is fascinatingly reconstructed, as is the way that the establishment of the Mormon town transformed the trek west for those who continued to go westward in search of a new home, or gold.

But the book felt superficial. I wanted to know more about the motivations of those who chose to take the arduous trip west. McLynn makes it clear that these were not the poor, nor simply those looking for a better life. It was, in McLynn's words "almost... a middle class movement". Those going had to have ready cash, needing $1000 at minimum for the trek. As McLynn says, the poor couldn't afford to go, and the rich didn't need too. But why did they? McLynn rejects the idea that this was simply some inherent American yearning, but if we leave aside the romantic, the answer must be practical. The "boosters" encouraged people to move for abundant and arable land, but was this dream the only reason? I'd have liked more information on what happened to people when they got to the west, because rarely do we find out. McLynn focuses on the journey, not the people and the destination.

McLynn is also prone to some strange attitudes towards women, writing in one place that "Women also hated the burden of having to collect buffalo chips as fuel... a sterner trial to them than to their menfolk because of their keener sense of smell and greater general fastidiousness". McLynn dismisses the "romantic" view of the "western impulse" but is prone to his own flights of fantasy when he writes that the "inevitable effect of the 'feminisation' of the wagon trains [when they became family treks] was to enthrone home, hearth,roots and family as the supreme values, over the male camaraderie of free-spirited, open-ended, devil-may-care adventure." Such generalisations are unsuited to a serious work of history and spoil some interesting.

There should be a good book out there examining the social history of the wagon trains, but this is not it. McLynn manages, in spite of the fascinating nature of the material, to turn the story into a miserable trudge rather than an epic tale.
Posted by Resolute Reader at 5:18 pm