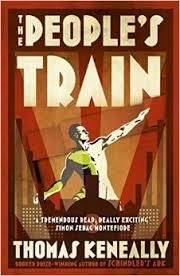 This fictionalised account of the life of Russian Revolutionary Fyodor Sergeyev is one of the best portrayals I have read of the experiences of those taking part in the Russian Revolution. Renamed Artem Samsurov, the novel covers much of his incredible life. Imprisoned for his roll in the 1905 uprising, Artem escapes and travels across Russia in disguise, into China and eventually finds his way to Australia. Australia is viewed by many as a workers' paradise, because workers' parties are in government. But Artem quickly discovers the reality is different. Artem quickly gets to organising the Russian emigre community, building unions and discussing politics. The Australian police quickly try to suppress the socialists, and Artem experiences an Australian prison - his time in Russian prisons serving him well. When the Russian Revolution breaks out in February 1917, Artem returns, quickly being elevated to the ranks of the Bolshevik Central Committee. The final part of the book, dealing with the turbulent times running up to the October insurrection are through the eyes of Artem's friend and comrade Paddy Dykes, an Australian union journalist who reports on what he sees.

Keneally's novel is a detailed and faithful account of events, as well as the politics of the Russian socialist movement. Pitching the novel like this however implies it is some sort of dry historical tome. But the opposite is the case. Keneally's writing is brilliantly clear, his characters beautifully portrayed and their discussion of politics is less about Marxist pedantry, than their attempts to understand, and explain the world. Few novels have got to the heart of what motivated Russian revolutionaries to risk life or imprisonment. When Artem discusses Lenin, he can't imagine him being motivated by romance, rather a dedication to the cause. But all the characters here are actually motivated to fight revolution, because of their intense love for people and their desire for a better world. Indeed, the love stories at the heart of the book are very much an exploration of the way powerful and intense events bring individuals together, for good or bad, and how they must sometimes be put to one side for the sake of a bigger cause. The novel ends with the seizure of the Winter Palace and the muddied confusion of actual revolution. The insurrection itself is not the clean, romantic ideal, but is uneven and on-occasion unpleasant. I do hope that Keneally writes the promised sequel - Artem, or Fyodor's post revolutionary life was shaped by the rise of Stalin and the defeat of internationalism. It will be fascinating to see whether Keneally does this period as much justice as he with his portrayal of Russian revolutionaries and life before 1917.
Posted by Resolute Reader at 1:46 pm