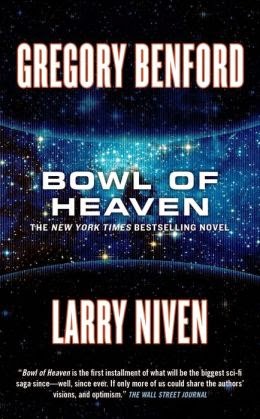 Larry Niven's Ringworld was the original Big Dumb Object of science fiction. In that eponymous novel his characters explored a giant ring around a sum, encountering a variety of aliens species (some lethal, and some not) and, rather oddly in some of the sequels, offering to shag them.

Bowl of Heaven has a similar premise, if not the shagging. Perhaps under the influence of his fellow author Niven has curtailed his penchant for sex (Rishathra as Niven chose to call the practice) with aliens and instead their combined talents concentrate on the descriptions of the Bowl, the Big Dumb Object of Bowl of Heaven.

The spacecraft Sunseeker leaves Earth bound for a planet, oddly named Glory, in an attempt to colonise it. On their voyage they encounter the giant flying bowl. The bowl, with a surface area of millions of planets, travels along with its' sun towards Glory as well. Short of supplies, due to some unexplained gravity anomaly, the crew of the Sunseeker are forced to explore the Bowl. In doing so they encounter some unusually dangerous creatures who run the Bowl, apparently as a sort of intergalactic zoo. These bird-people don't Rishathra with aliens, but are obsessed with hunting and eating them.

The bird people are so intelligent they have created an enormous space-faring bowl which moves along with its own star. They have captured, genetically modified, and dominated countless species on their voyage. Yet they are outwitted by a small group of plucky earth-men and women, who use their intelligence and guile (and their unique brains) to outmaneuver the nasty aliens.

Frankly this novel is fairly terrible. I suspect that when I was fourteen I would have lapped it up. But almost thirty years later I wonder what the point is? The tragedy is that I will read the sequel, or part two as they publishers should title it, as volume one nearly finishes mid-sentence, if only to find out how the aliens stop their giant flying bowl when it gets to another solar system. But I'll be damned if I'll pay for the next book. Is there any good new science fiction out there? Or is it all just rehashed ideas from the bad end of the 1960s.

Its terrible, but frankly its not Larry Niven's worst. Gregory Benford should find someone else to co-author his next.

I don't award stars on this blog. But if I did, I'd give this one star.